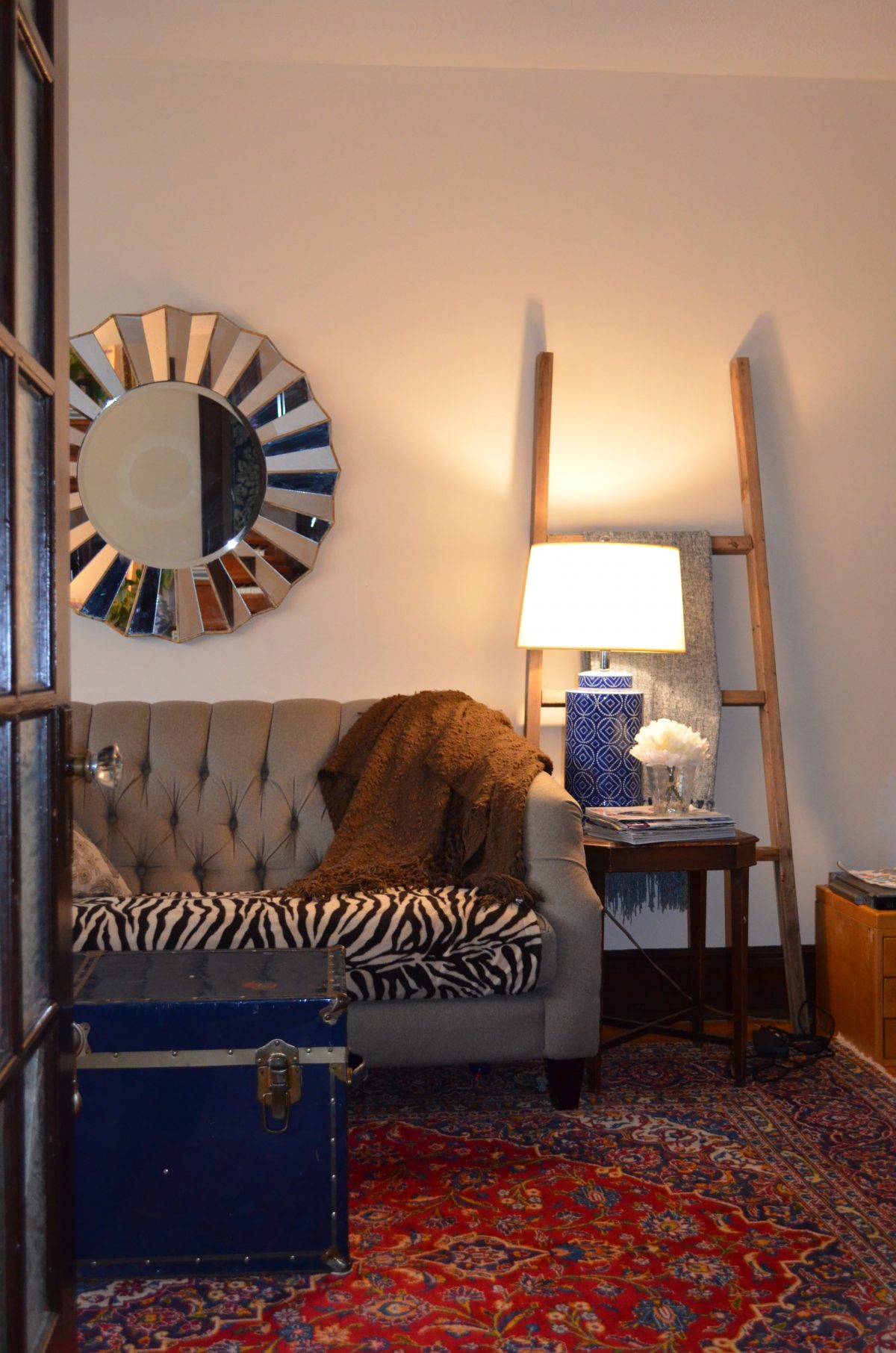 With three kids who do everything from watch television to ballet dance to car racing, and a mom who works from home and spends hours on the sofa doing her thing (instead of having her own home office), this is a room we really LIVE in. We’ve hosted parties here. We’ve had middle of the night feedings here. My son practises piano here. And my littlest one gazes out the front window.

It has taken me time to really figure out what works for our family and how I want this room to really BE. When we first moved in we had only one child and one on the way…and we thought we were done! But God had other plans and almost two years ago baby number three came along so having a space that worked for all of us yet satisfied the creative side of me wasn’t easy to figure out! It’s a space that has evolved with us in the four and half years that we have been in this house. Furniture has come and gone. The rug has been replaced. Artwork has been switched around…and there is more that is yet to be done.

There were two rooms in particular that REALLY influenced the design direction of this room and slowly but surely, this room is evolving into a space that really works for our family AND makes my heart happy at the same time. 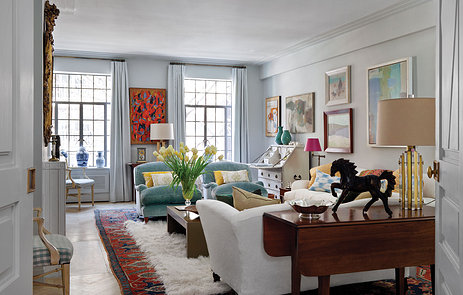 Room number one:
What I loved about this room was the warmth, color, and collected feel that it showed. It doesn’t look like a model home, but a space that is really LIVED in and has layers of life. There were specific things that really stood out…
• How the red rug was really the focus of the room
• The artwork looked curated over time rather than a typical gallery wall without soul
• The drapery was the same color as the walls
• The blue chairs
• The secretary in the corner
• The soft fur of the layered rug
I could easily see how to incorporate these elements into our living room…but I also knew that is was not something that would be accomplished overnight!

The second picture was the living room of Designer Meredith Heron. I took one look at those curtains and they were embedded in my head…I LOVED them! Her space was laid out in a similar manner to mine so there were things here that I knew would work in my space as well…
• The feminine sofa
• Smaller scaled chairs
• The blue and white scheme
• And those curtains…swoon… 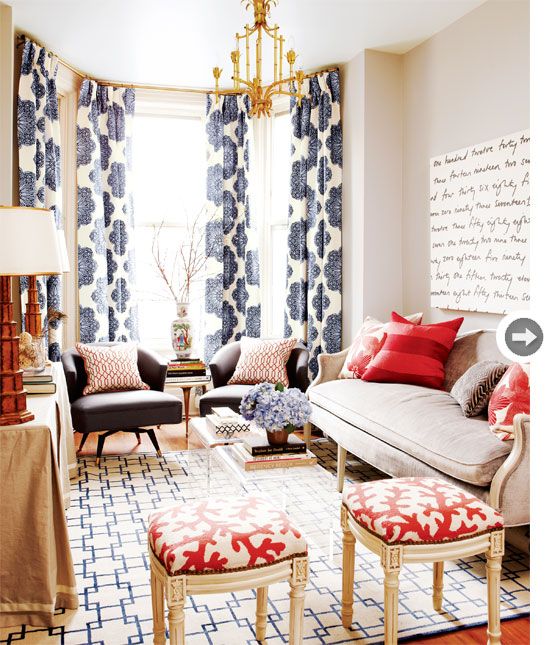 Design by Meredith Heron via Style at Home

Over the last couple of years, we have slowly begun to change things out and the first thing to go was the rug. The budget was tight…$600 including tax was the max we could go so I was checking Homesense for months to see if there was anything that interested me and would also coordinate with the rug we have in the dining room. Nothing. Anything I saw was way, way more than we could afford, or too trendy; and I had hoped to find something in wool for its durability and cleanability too. I even prayed about it—I wanted it that badly! Then, one day--on a whim--I looked on Kijiji just to see what was there. I was REALLY leery of purchasing a used rug as you just have no idea what is in it and that grossed me out a bit. But I stumbled upon an ad which was EXACTLY what I had been looking for in the EXACT budget that we had, in the EXACT colors we wanted…AND it was wool! I couldn’t resist—I had to check it out!

The homeowner had purchased the rug recently and found that it was too dark for the space…so she decided to sell it rather than return it. So I bought it. Seriously, it was a Divine moment (I’m sure I could hear angels singing) --a gift from above saying “Here ya go…isn’t this exactly what you asked for?” Yup…it sure was! I love it when God just sends these little messages that let me know HE knows the desires of my heart—right down to the last detail.

The next thing that changed was my desk. Originally, I had a dark espresso desk with one large drawer. It wasn’t practical as things never stayed tidy and the dark color was just too strong for the room. I wanted to replace my desk with something that had more storage—nice drawers so I didn’t have to go running to other regions of the house anytime I needed supplies, and something lighter…a soft gray or off white. Like in my inspiration pic, I was looking for a vintage secretary.

Well, I was scrolling through Facebook about a year ago when The Millionaire's Daughter in Hamilton posted this picture of a desk for sale—EXACTLY what I needed! I picked it up a few days later and viola…new home office! 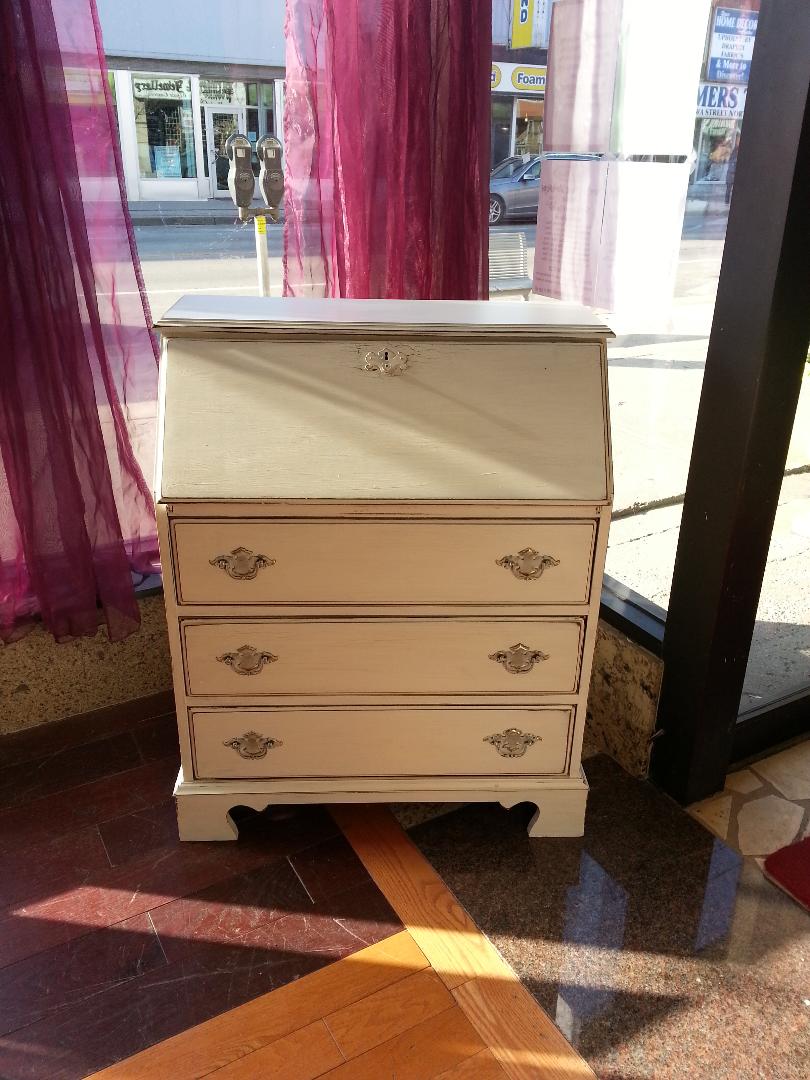 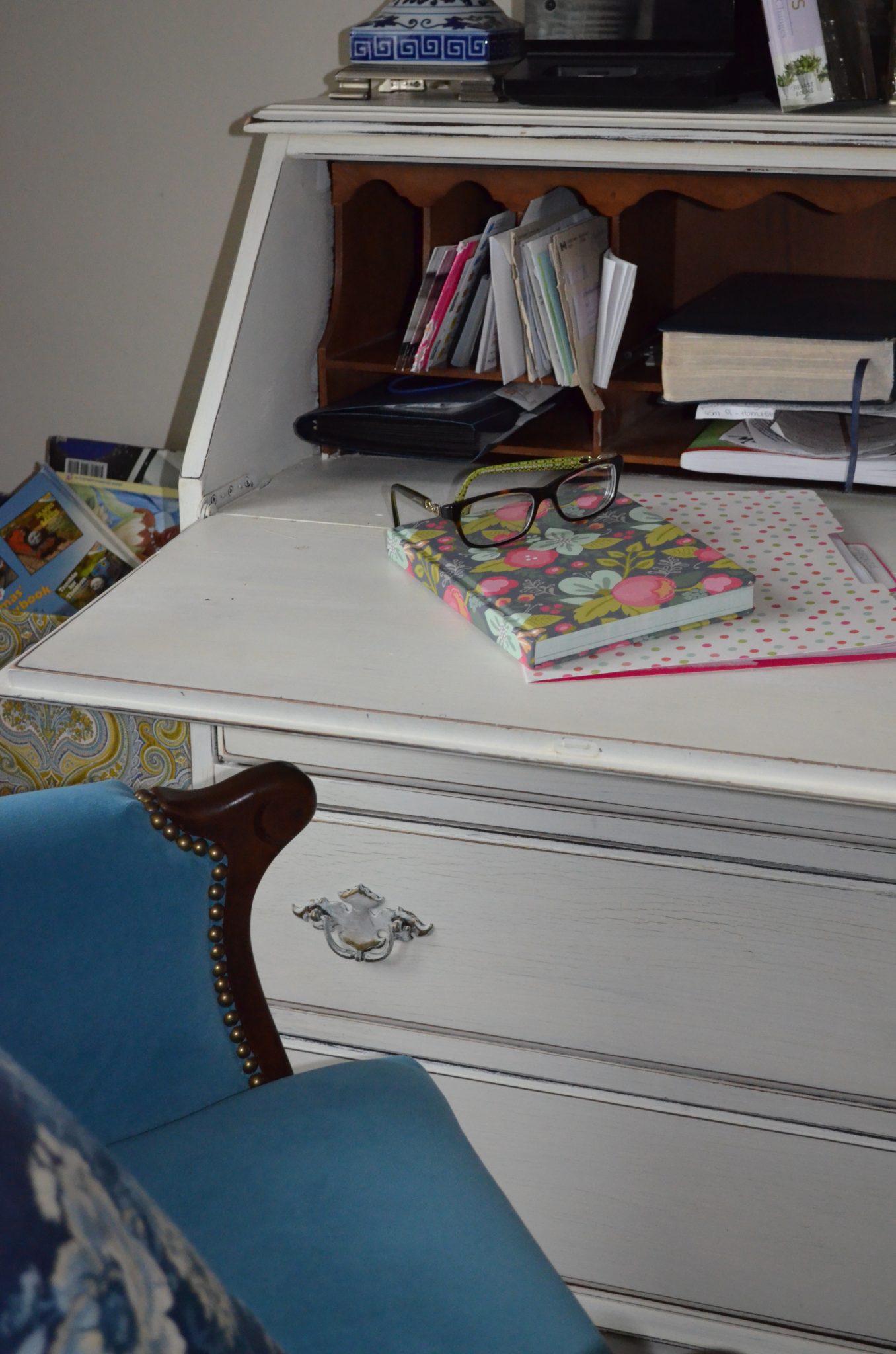 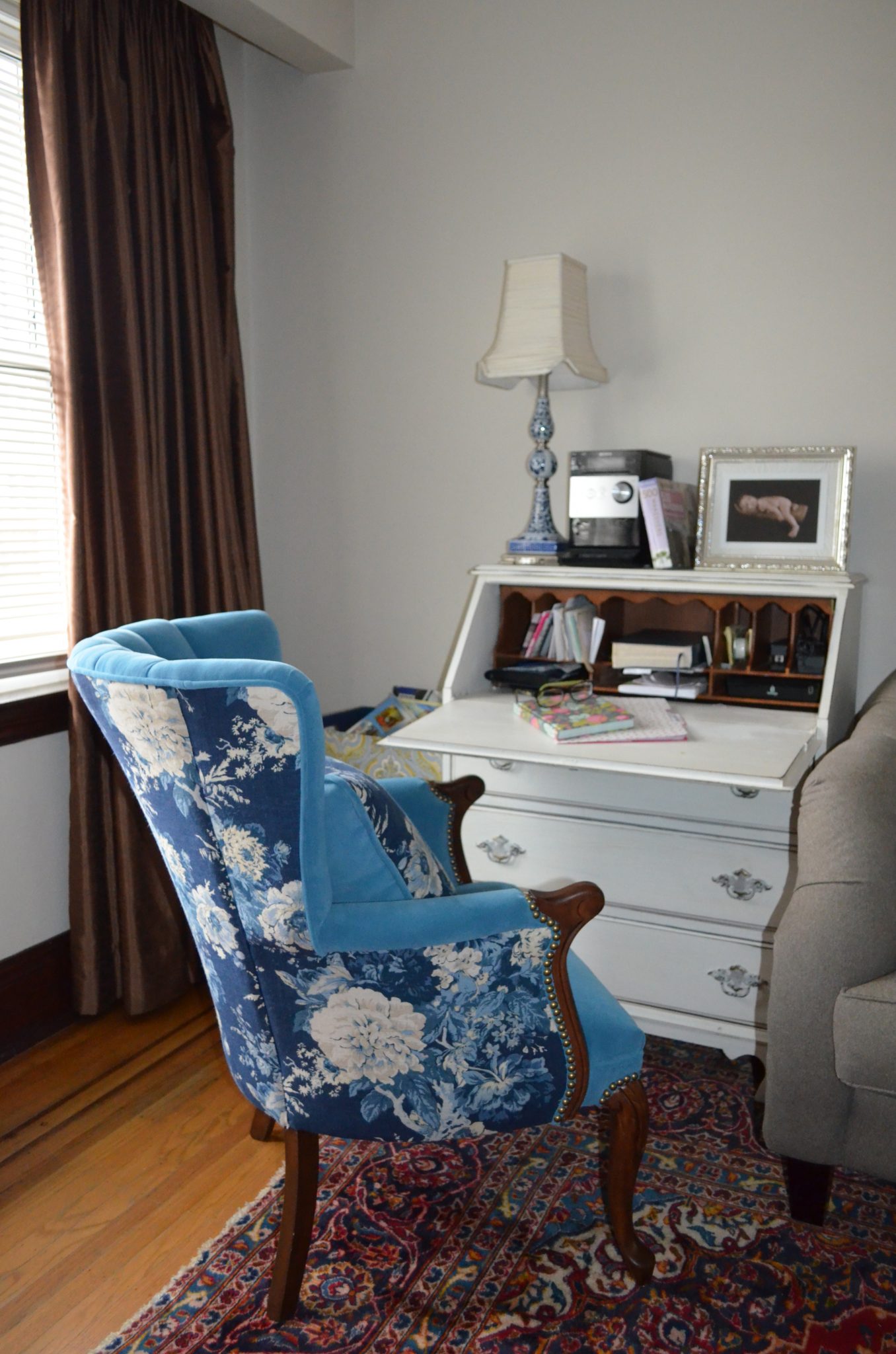 The lovely upholstered chair that I wrote about here now has replaced two wing chairs that were here previously and adds that lovely jolt of color and really opens up the space.

Now when it came to the curtains, believe it or not, I was torn! I loved how the low-key drapery in picture 1; it really made the colors in the room stand out. But the pattered curtains in picture 2 still had a strong influence on me and I had a really hard time letting go of that idea; plus, I hadn’t found anything in my budget that was even remotely similar to that gorgeous pattern!

Until this past summer when I spotted this fabric at Ottawa Textiles. 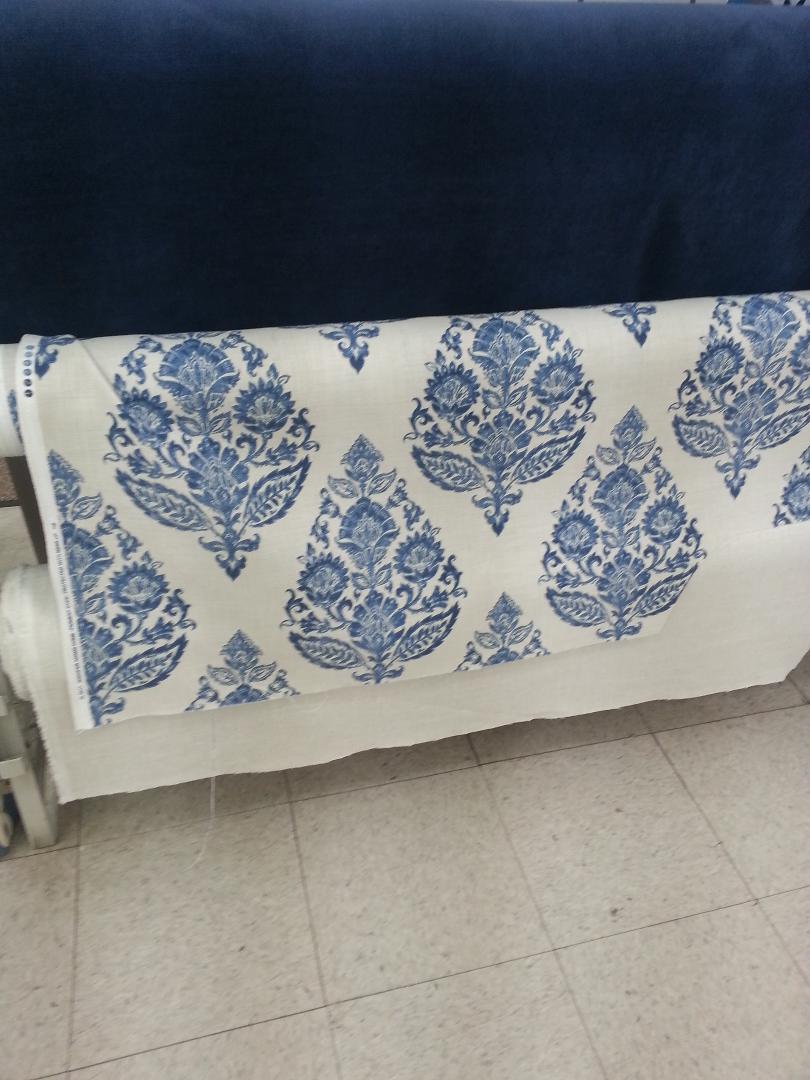 Even with taking home a sample, I was still SO undecided! It seriously took me a month--maybe even two—to really settle in my brain that THIS was it! Eventually I came to realize that the plainer fabric just wasn't a good fit and there was a reason why I just couldn't do it--it just wasn't "Me" and I preferred the pattern--I LOVE blue and white patterns!!! And it would be more child friendly as well.  I took the plunge last November and purchased the fabric and installed the dining room drapery first, as both rooms needed to have the same window treatment. And now, new draperies for the living room are in production—I can’t wait!!!—I’ll show them to you once they are up.

What’s next? Getting the room painted, and working on that curated gallery wall. I have a couple of pieces already, but it’s going to take some time to get that project completed—and I’m okay with that. A room curated over time has those layers that doing a one-day-shop-a-thon at a big box store just can’t duplicate! In the evolution of my living room, I was able to incorporate the things that really worked for me from both Inspiration rooms and made this living room a space that works for our family in every way. Nothing in here is extravagant or untouchable. My new desk even has dings from my little guy whacking it with a metal spatula! And it will continue to evolve as our family changes and grows.

So here is the official “before” of living room as once those curtains go up, it will look like a different room…and I can’t wait to show you! 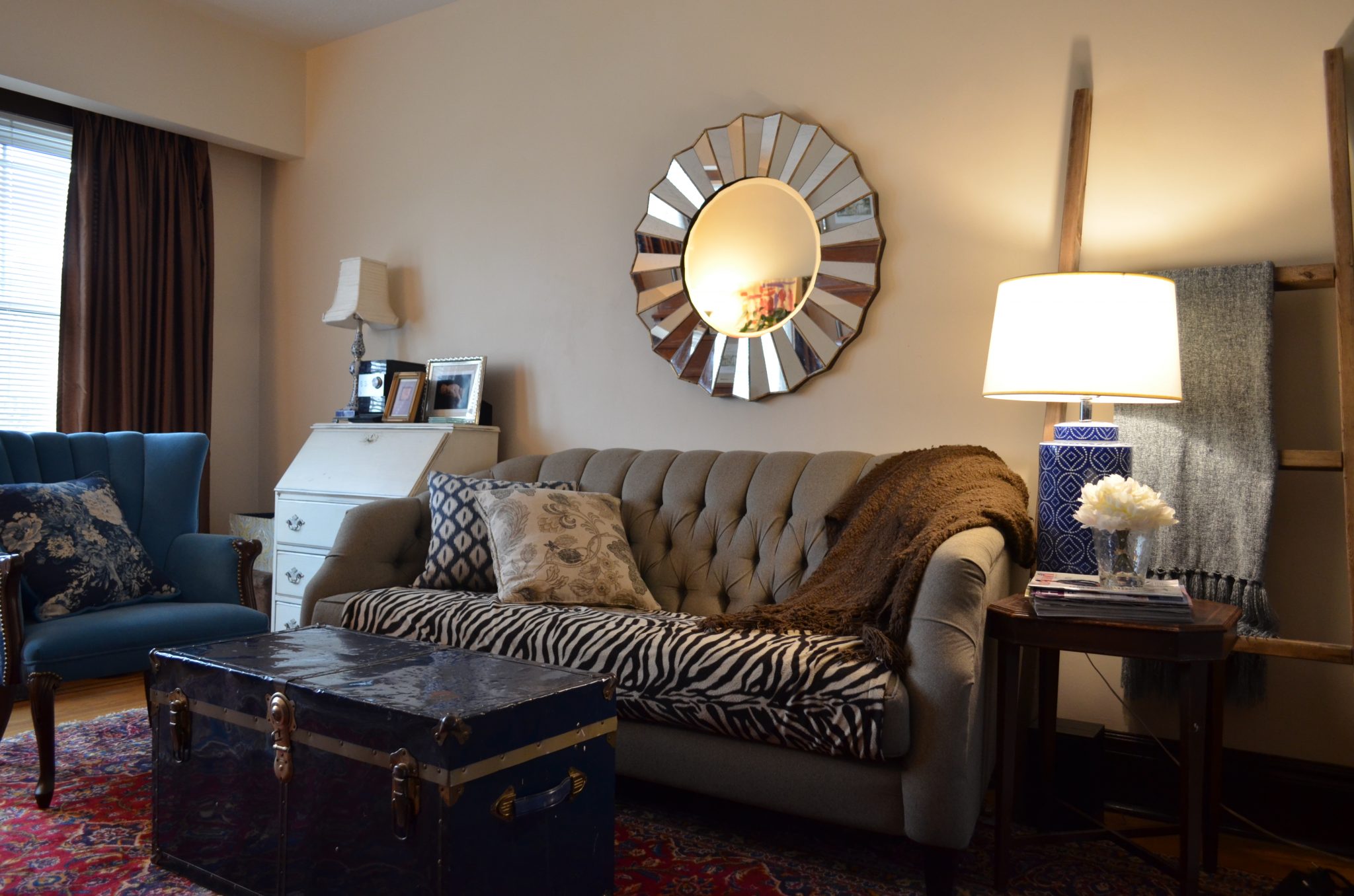 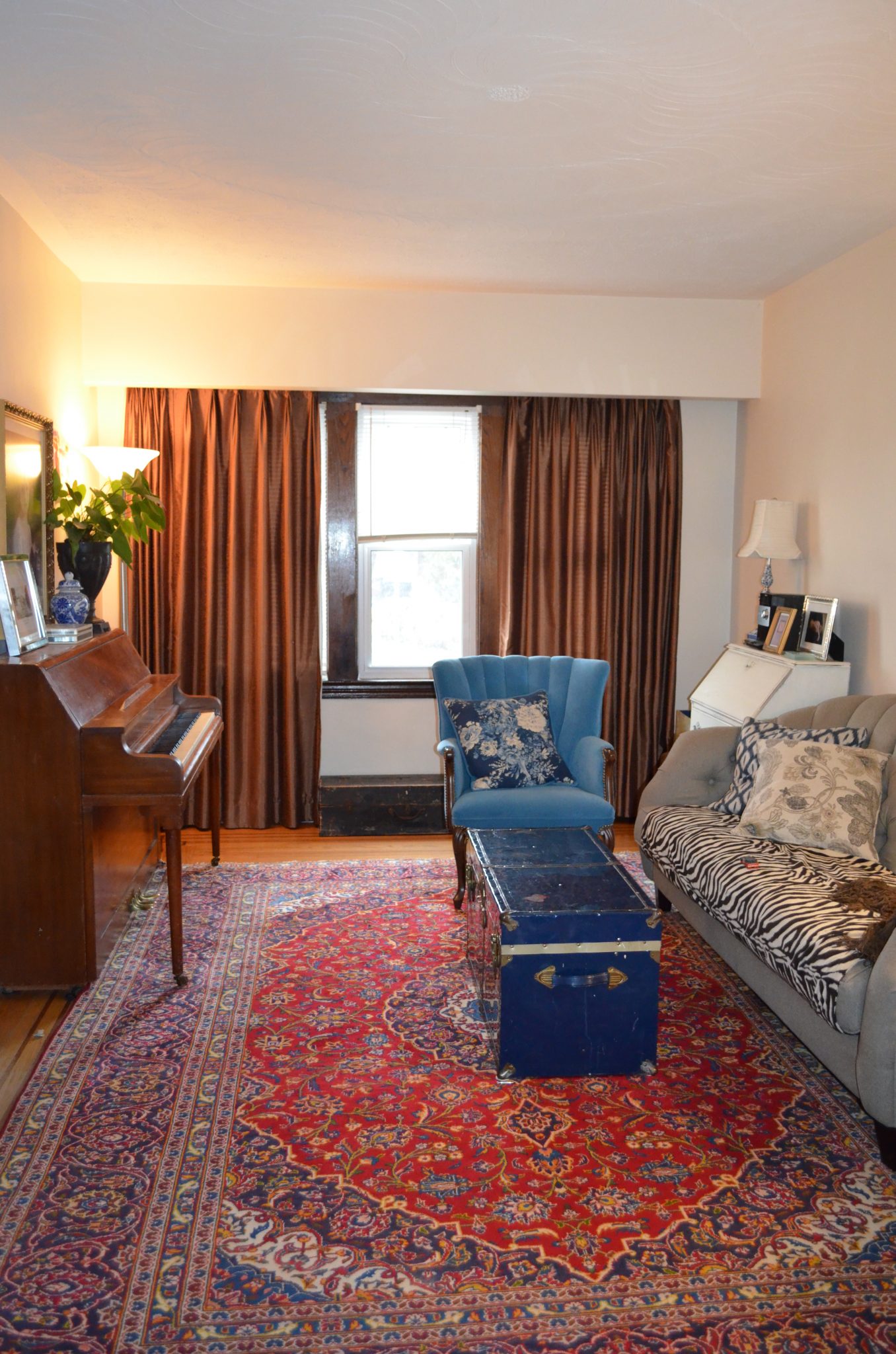 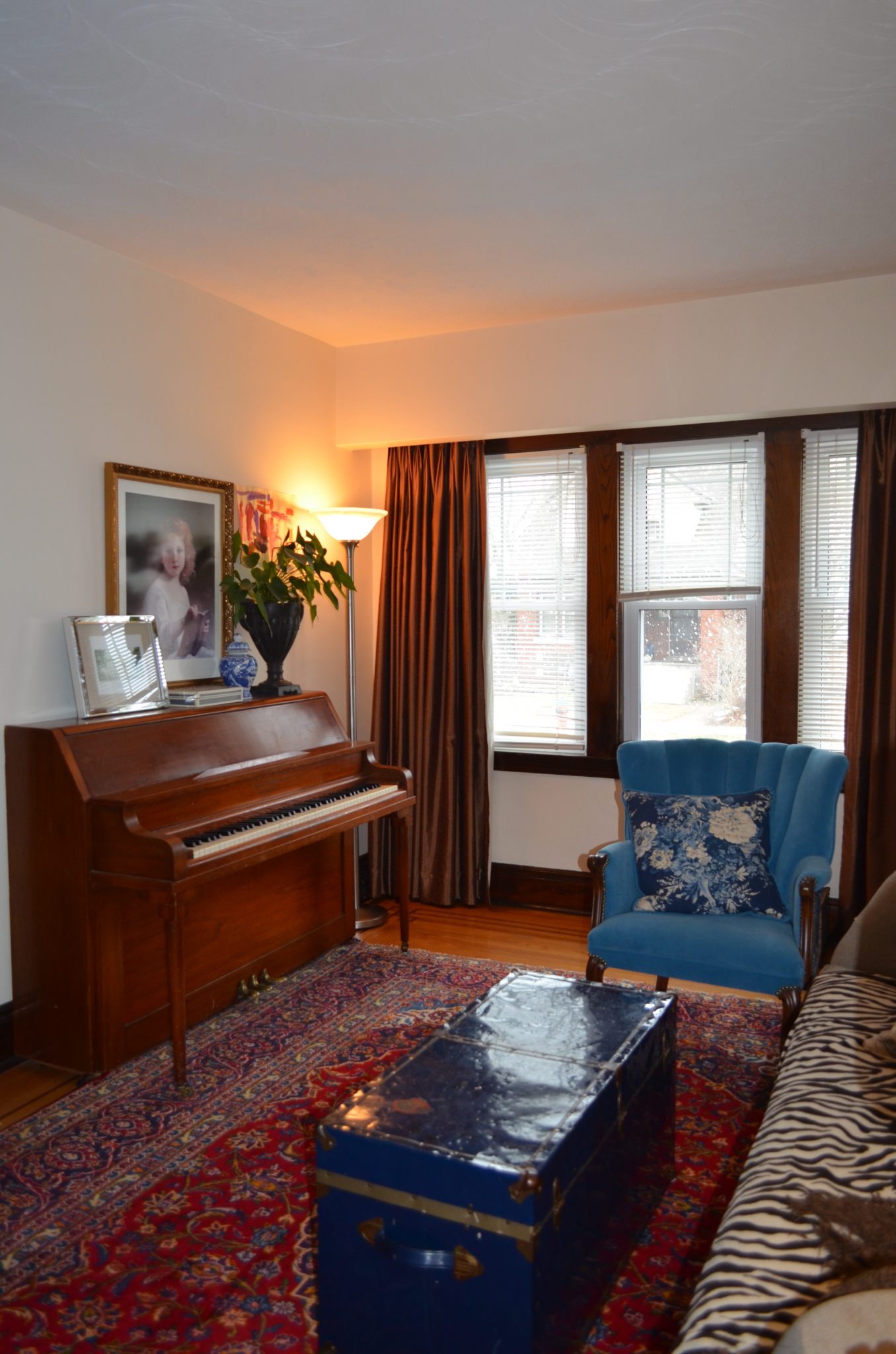 “You are allowed to be a both a masterpiece and a work in progress, simultaneously.” Sophia Bush