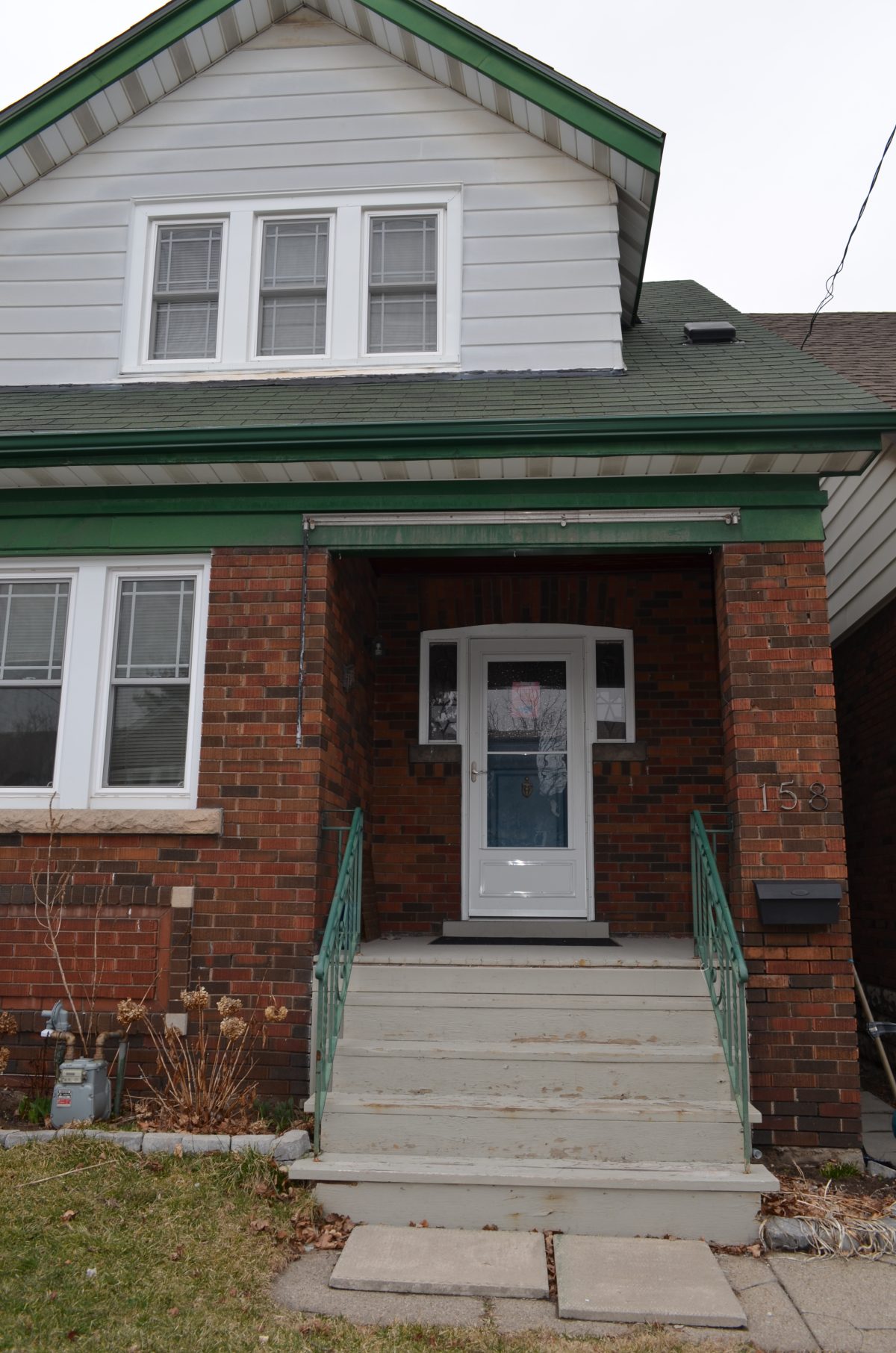 Ever have a project (or two) in your house that just seems like it is taking forever to complete? You have the best of intentions and somehow it just keeps getting pushed back and you never seem to have the time you think you have to really do it right? Meet my front porch...our perpetual work in progress!

This space  has been "a work in progress" for about three years and let’s just say we’re not happy with how slowly it is coming along. But this year will be THE year. The year it finally gets done. The year where I don’t feel embarrassed as a designer that my porch has ZERO style factor. The year that the outside of the house represents those who live inside the house! Woot! Woot!

When we first bought our house, one of the things I immediately noticed about the exterior was how “green” it was. Forest Green was everywhere--awnings, window frames, the screen door, gutters and downspouts, front and back--and it has been my mission to reduce its presence wherever possible! The roof is in too-good condition to replace, so it has to stay. But slowly we have been changing things out and three years ago, this is how things were looking. 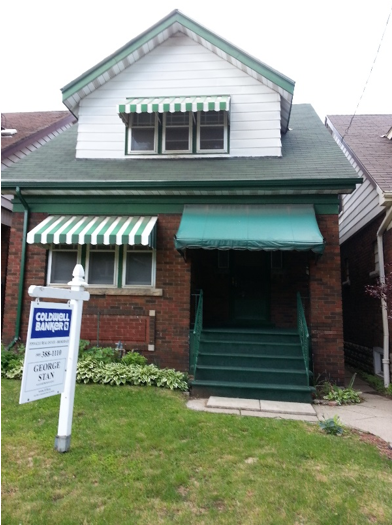 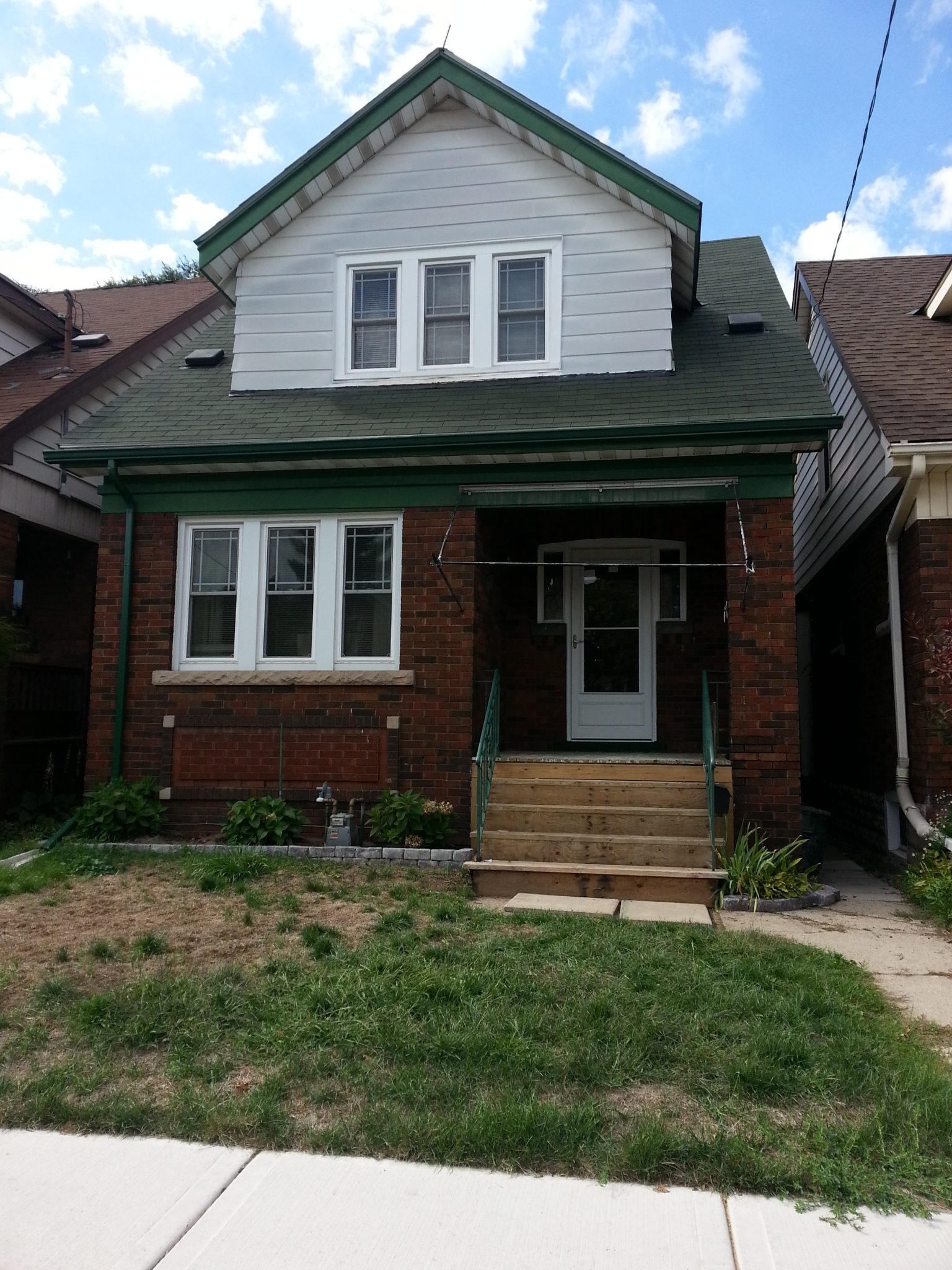 Window frames and Screen door replaced. A step in the right direction!

In the fall of 2015, my hubby ripped out the green indoor-outdoor carpet and, let’s just say that didn’t exactly improve what the porch looked like—glue was everywhere and it had become too cold to really do anything about it. So, we waited for spring (even though it looked horrific) and it would be on the top of the to-do list.

The green fabric awning also started to tear that winter and the big debate was whether or not to replace it. I loved the increased light in our front hallway but my hubby really liked the extra protection from the elements. Once the quote came in for almost $1000 to replace it, well…that officially put a new awning on the don’t-really-need-it-now list. We also decided to remove the metal awnings from the Bedroom and Living Room windows which really helped to increase the light INSIDE the house!

Well, Spring 2016 came and we had our third child that April. Then when he was only seven weeks old, my eldest son broke his arm one month before school was out (surgery, five pins and one massive cast later….) so we were a little distracted!

Step 1: Change out the rotten wood.

Done the first weekend of July-check!

Then August came and we went on vacation, worked on other things, and basically got little else done until September. 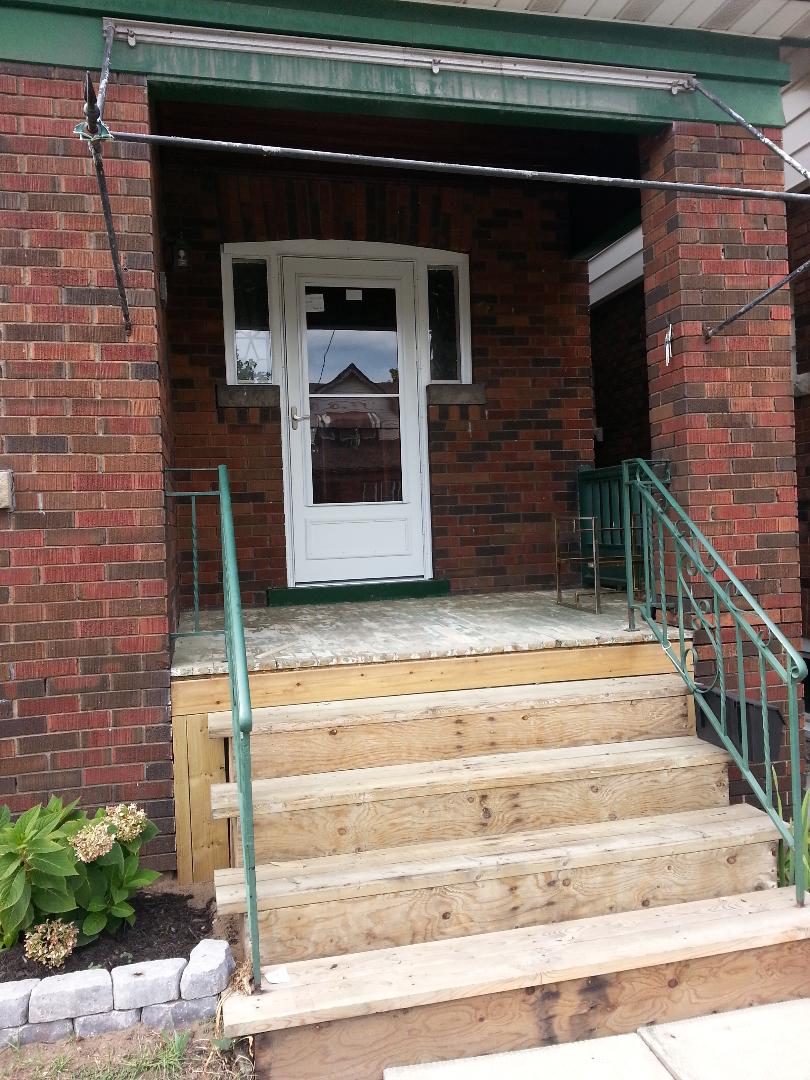 Fall was around the corner and we still had a lot to do but by the end of September, we had a lovely painted porch. We finally just hired someone to do it for us and the improvement was significant! Sigh of happiness…our house was no longer the eye sore of the neighborhood! 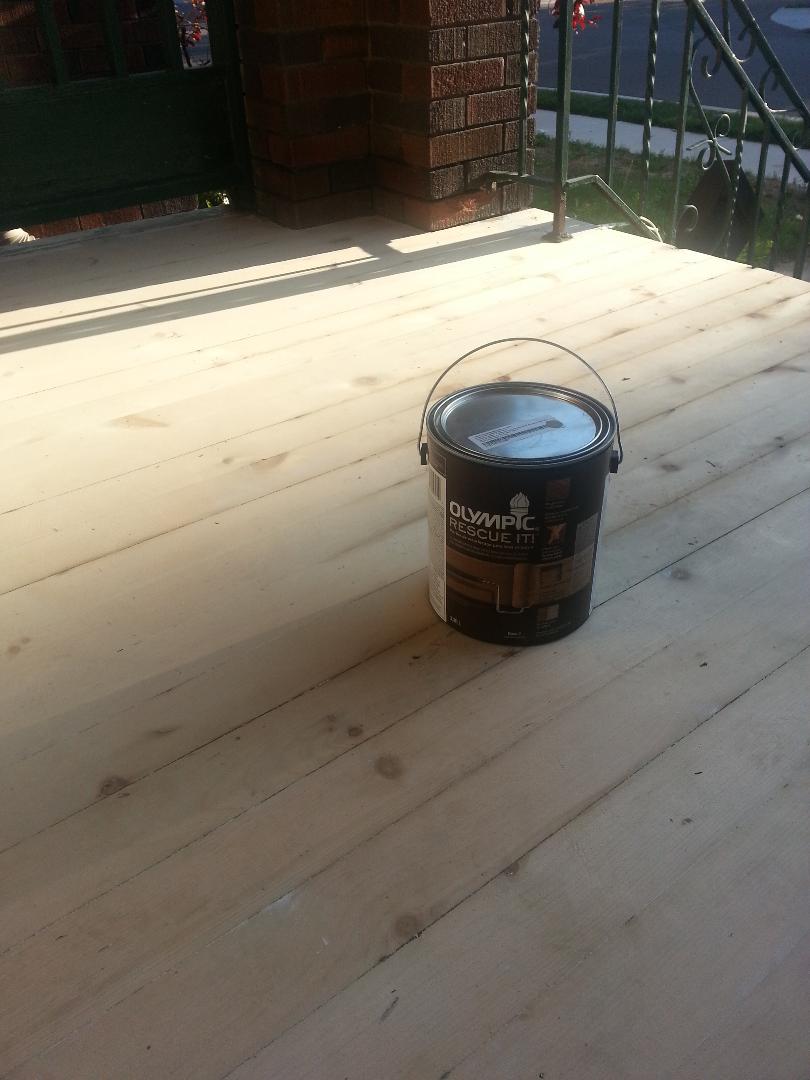 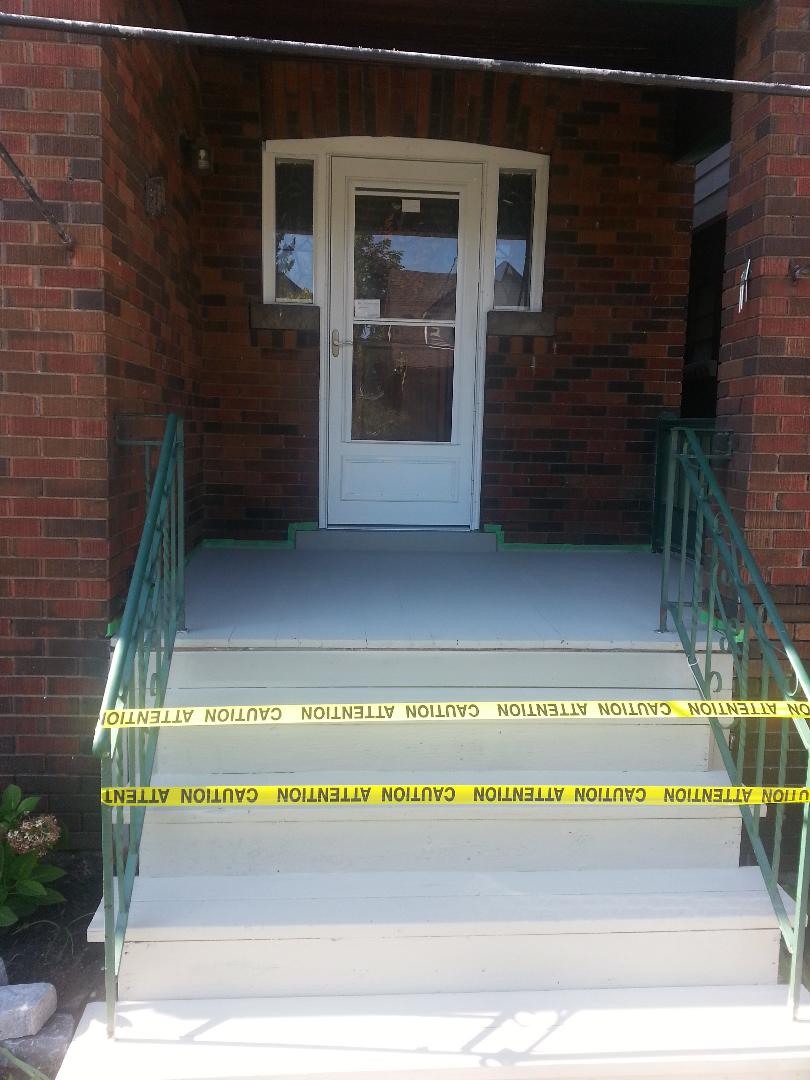 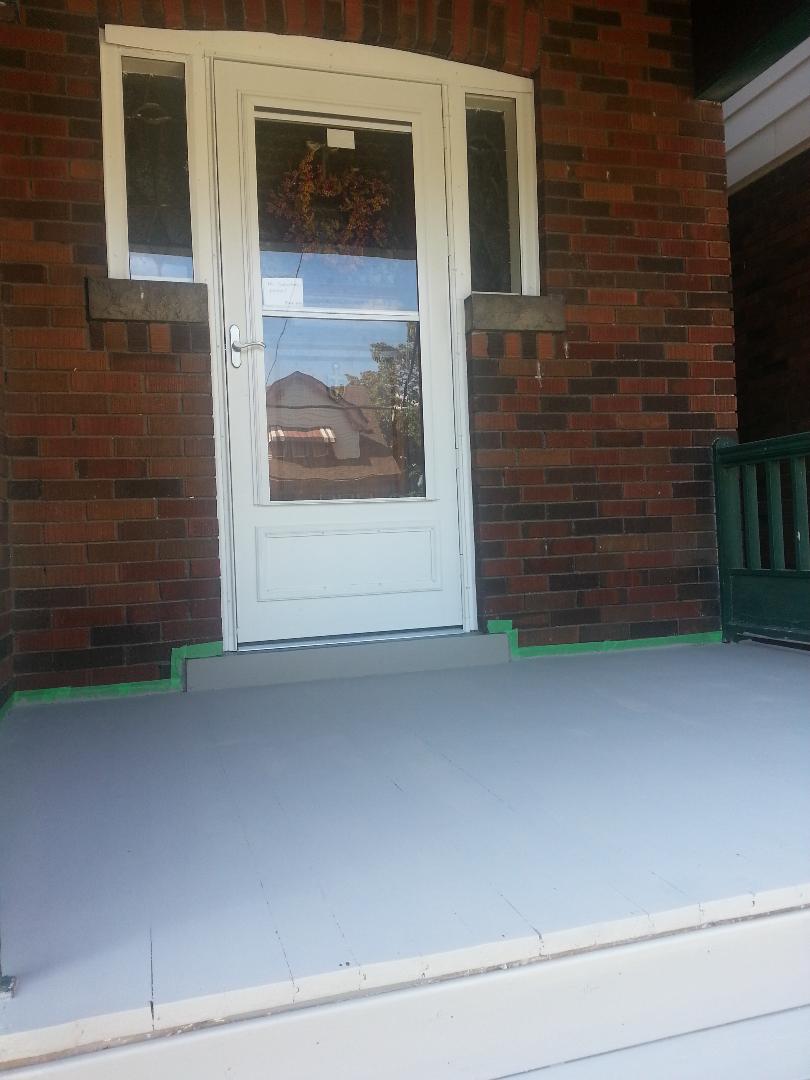 Fast forward to 2017. The plan of spring/summer was to paint out the railings, hang the mailbox and new house numbers, change the light fixture and accessorize. Well…2 out of five made the cut! It didn’t help that we had a wasp nest right by the front door that took a month to get rid of…and much to our dismay, the paint on the stairs was already starting to peel. 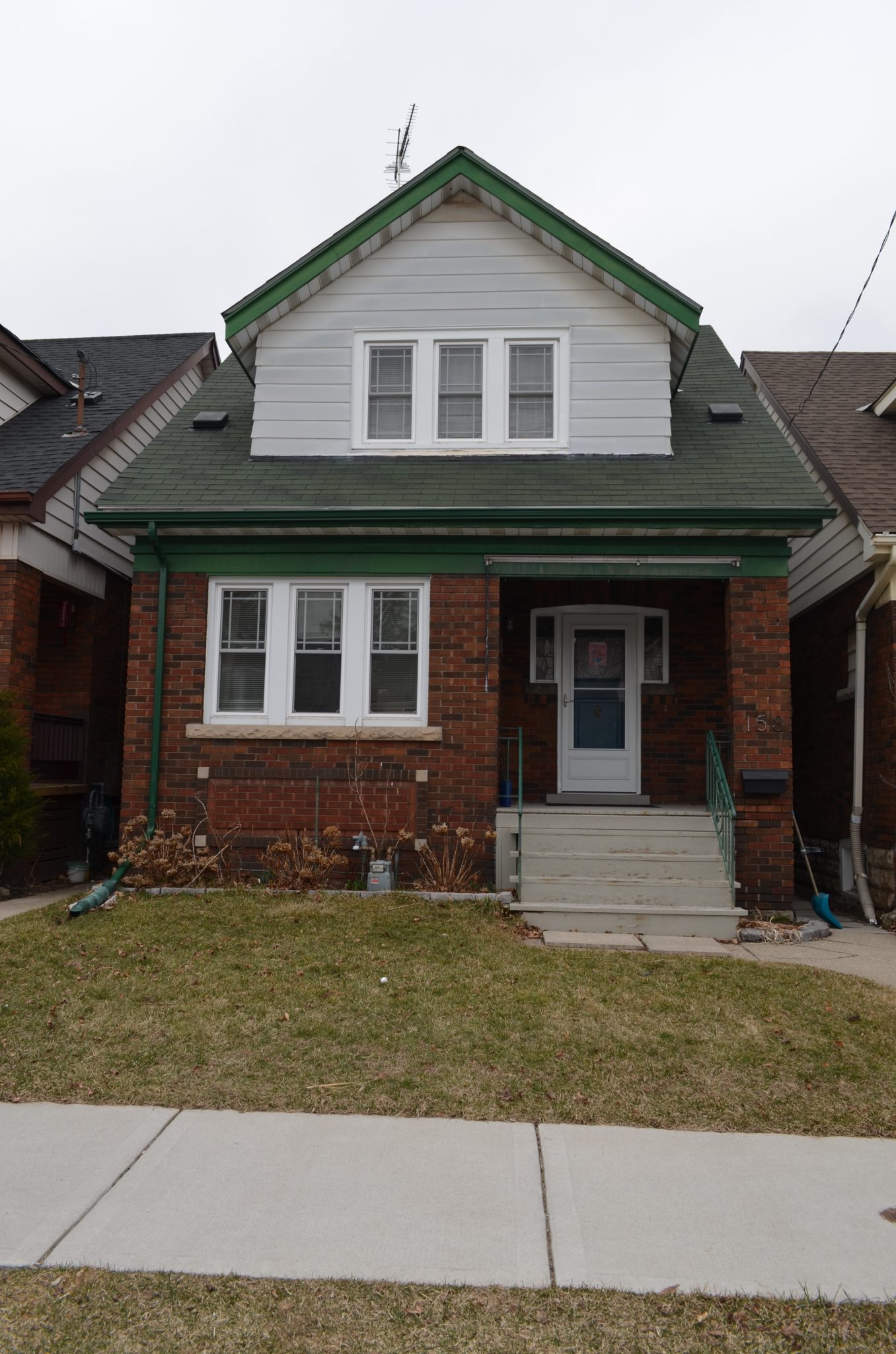 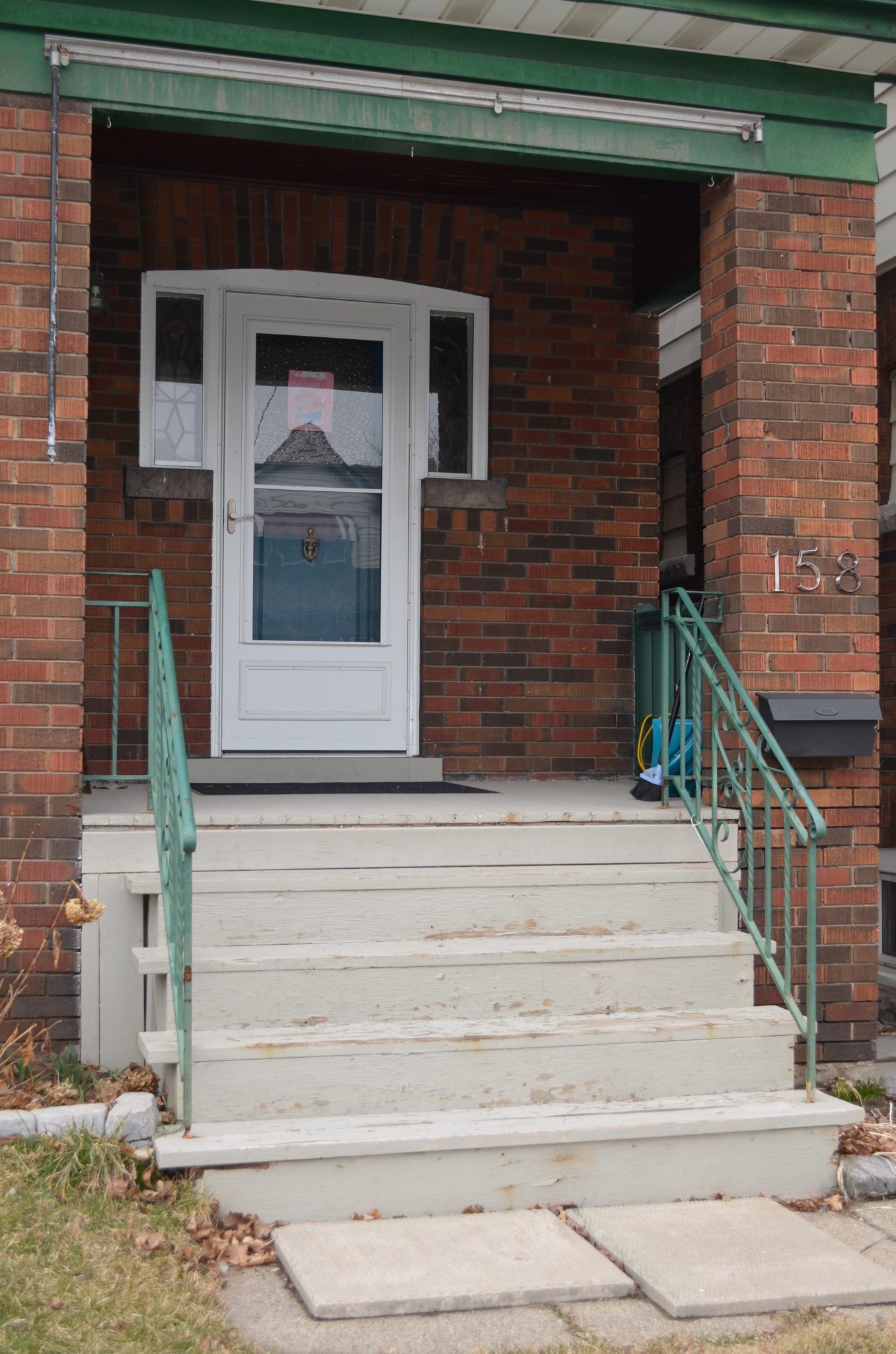 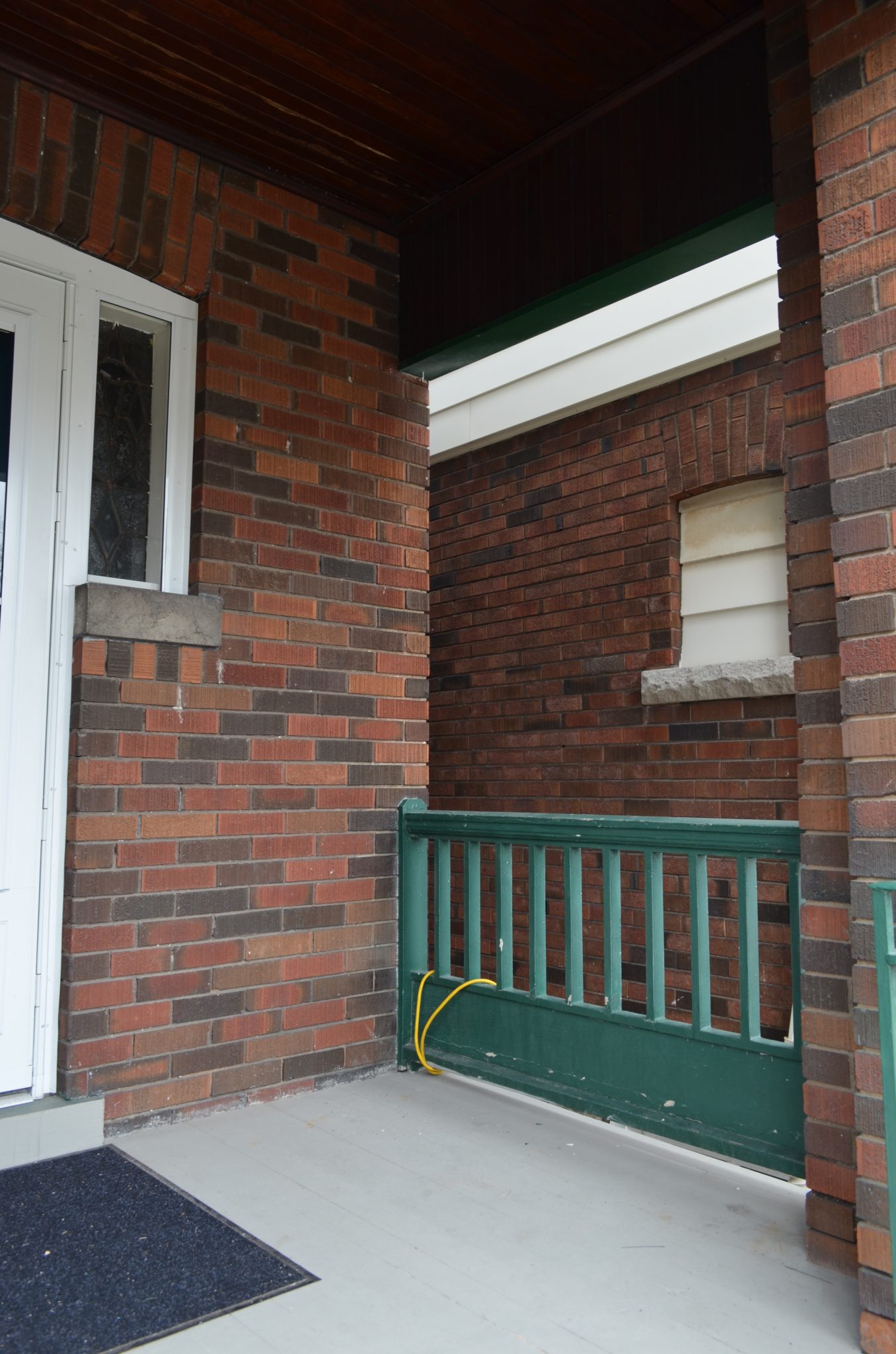 So, what’s the plan for summer of 2018? Buckle down and just get her done! Hopefully I can get those railings painted before the kids are finished school. The light fixture is purchased and just waiting to be switched out. We will have to scrape the paint off the stairs and find another product that will actually adhere to the wood—maybe a stain of some sort that won’t peel, and matches what we currently have (never a fun process). Can you tell I’m looking forward to it? Um, no. I look forward to the it-is-finished part because…

…the accessorizing can begin! I’d love an outdoor rug to brighten things up, along with an inexpensive side chair and table in a fun color. The odd theft happens in our neighborhood (sad to say) so I don’t want to spend big $$$ on something that might not be there in the morning! I recently found this screen that I’d like to put up on the side of the porch as my little one loves to climb up on the railing and I keep having visions of one of them falling over the side—not good! I have even thought of hanging some outdoor drapery to add softness and just make the small area look inviting. Maybe something like this… 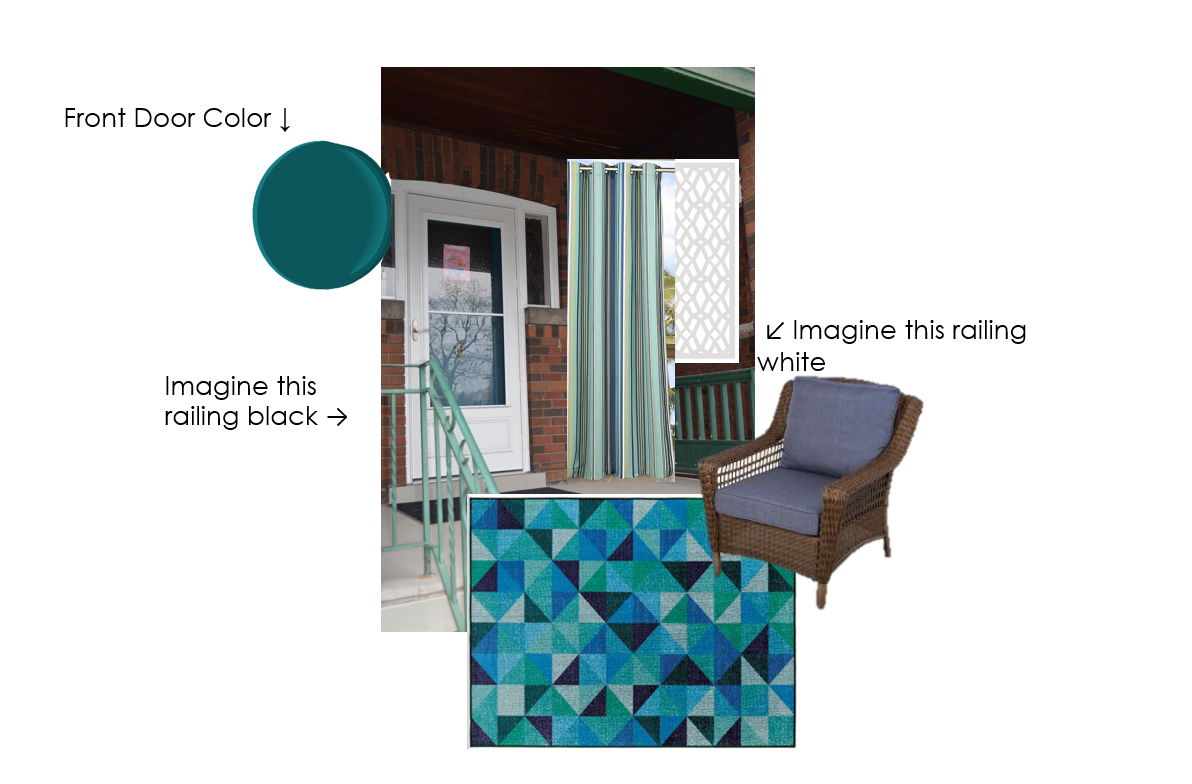 Will it actually happen THIS year? With determination and some elbow grease…and the fact that even my husband agrees wholeheartedly…I am going to say YES! ...but I’ll keep ya posted…

And maybe the next time you meet my front porch it will look a little less like a work in progress and a little more like “us”. Little by Little…we’ll get there!