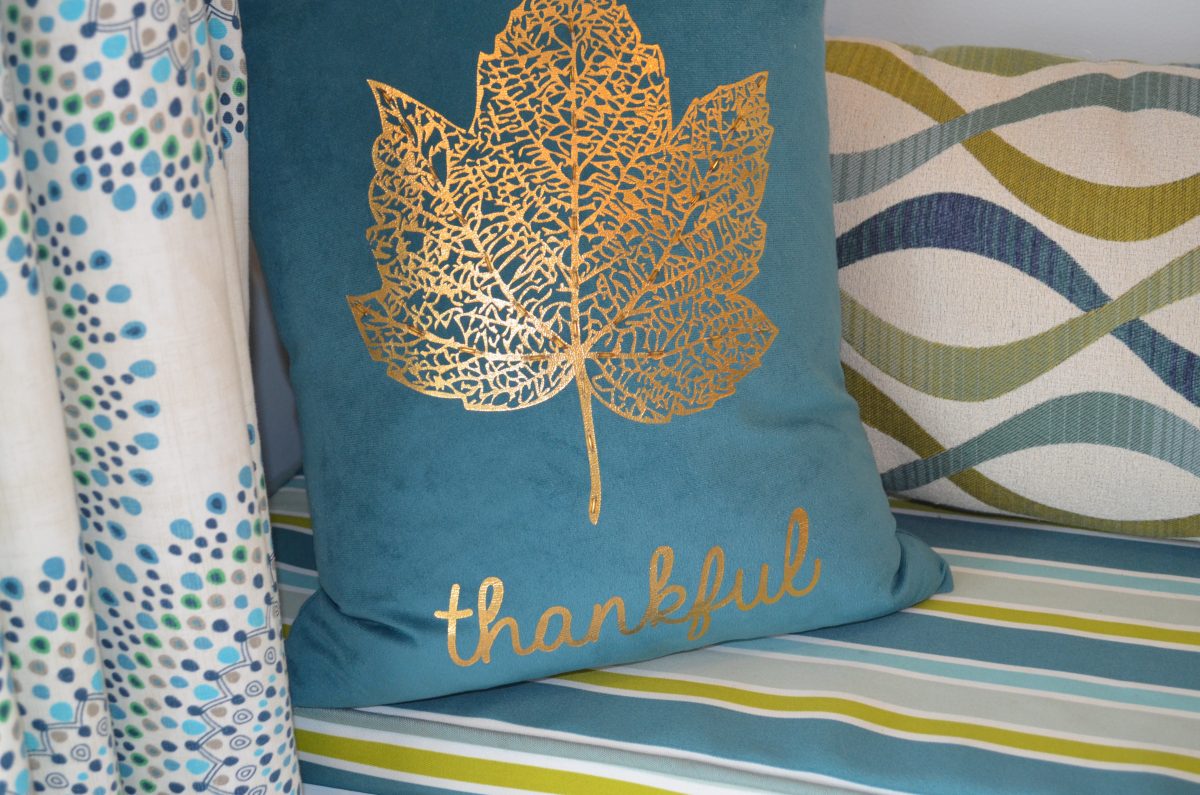 You know how you start one project…and many times something happens along the way that makes you have to start a second project…or even a third? The “Domino Effect” was the thing that got this kitchen project started a little sooner than the homeowner anticipated! New plumbing had been installed in the upstairs bathroom and as a result of a pipe’s glue not securing properly, a rather large hole made itself present during dinner prep one night when the ceiling actually fell in! Not how you’d want a project to begin for sure…but everyone was alright, the was pipe repaired and the ceiling patched…but it meant that discussions had to begin sooner rather than later!

Now, when you see the before pictures of this kitchen, you will see that the homeowner had a “gem” on her hands! The room probably hadn’t been updated since the 70’s and everything had to go! Drawers didn’t work, the layout wasn’t practical, more storage was needed, and the movable dishwasher took a large chunk of space out of their cramped eating area…and that’s just a few of the things that needed to change! 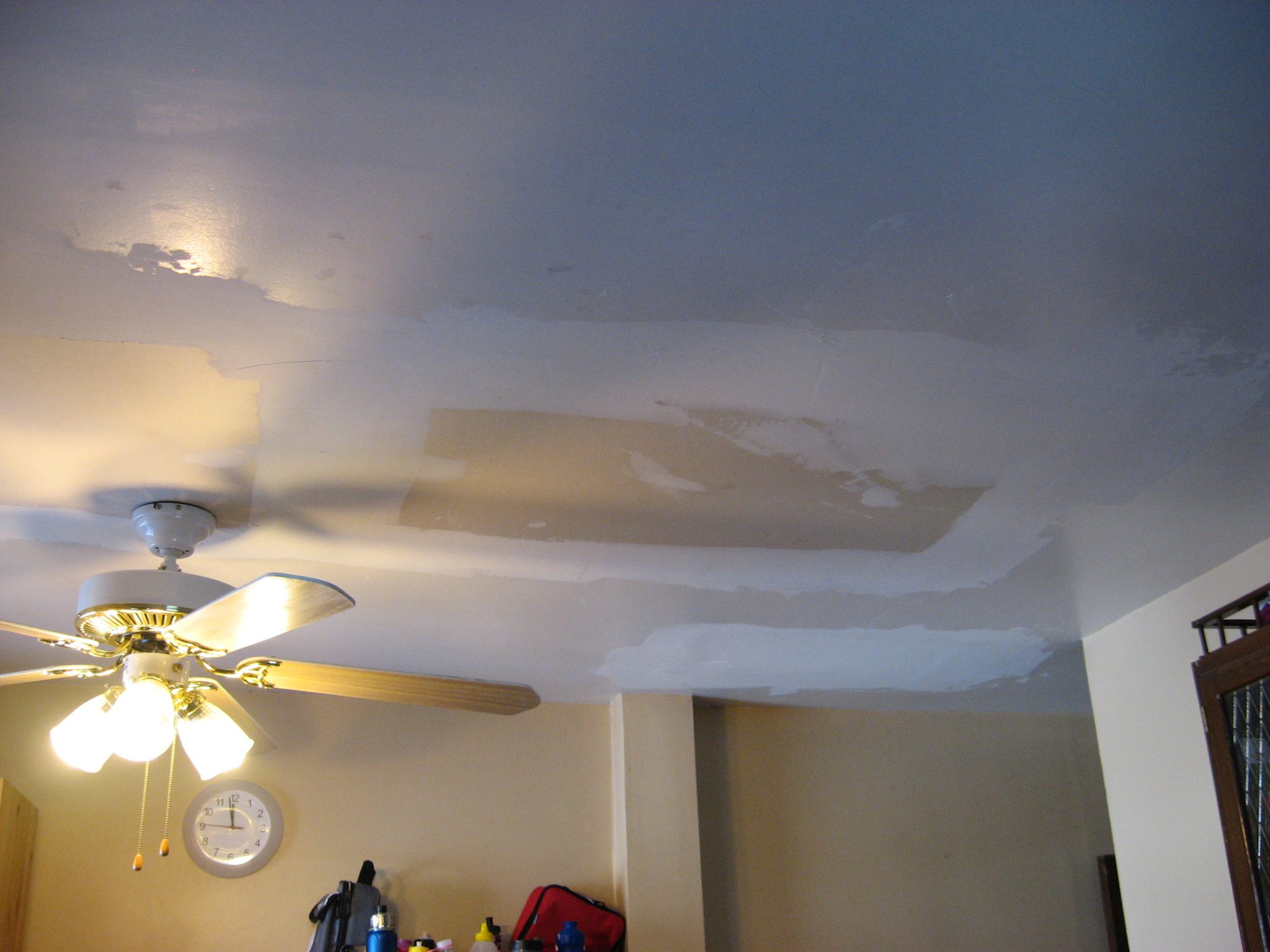 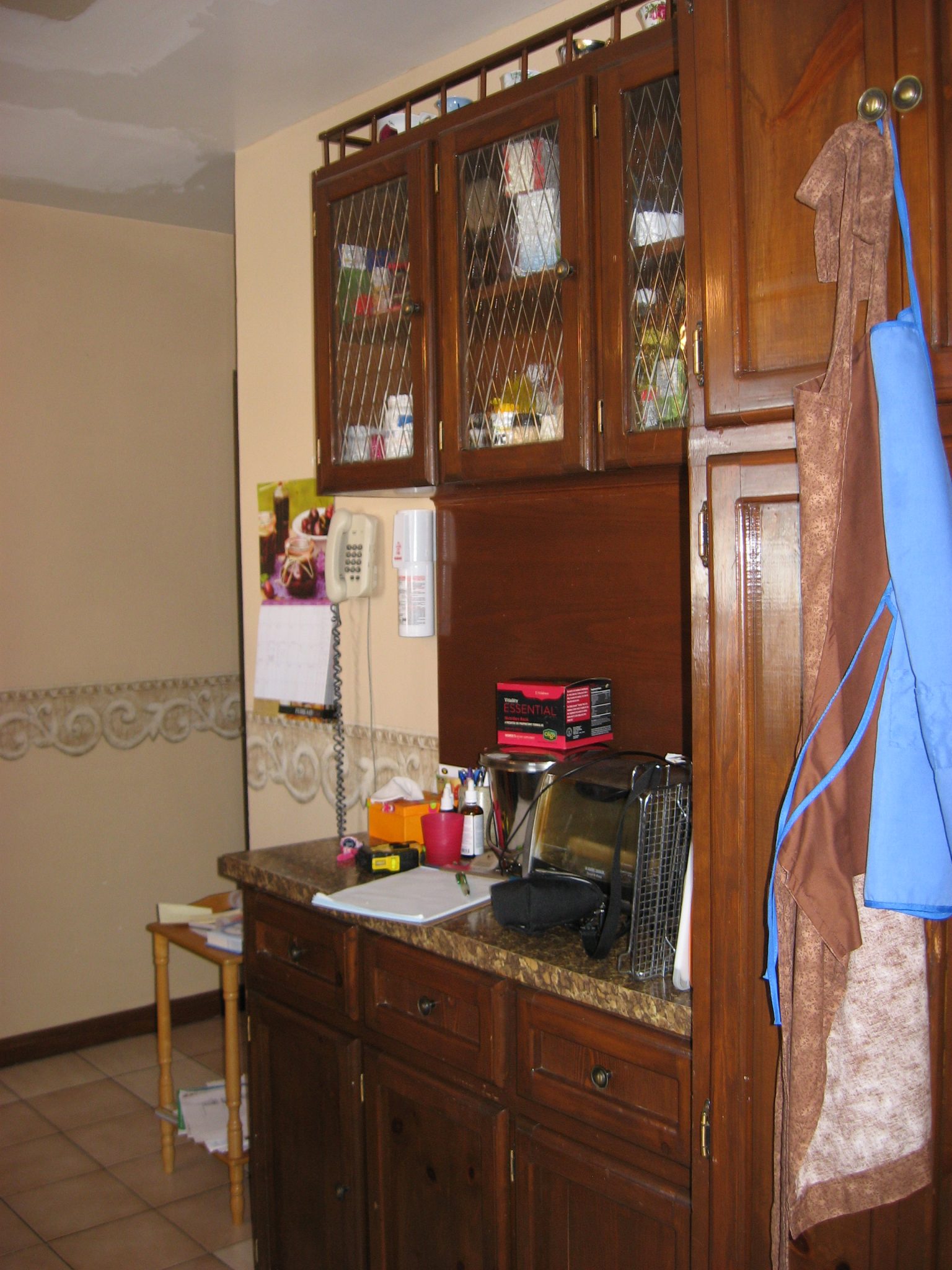 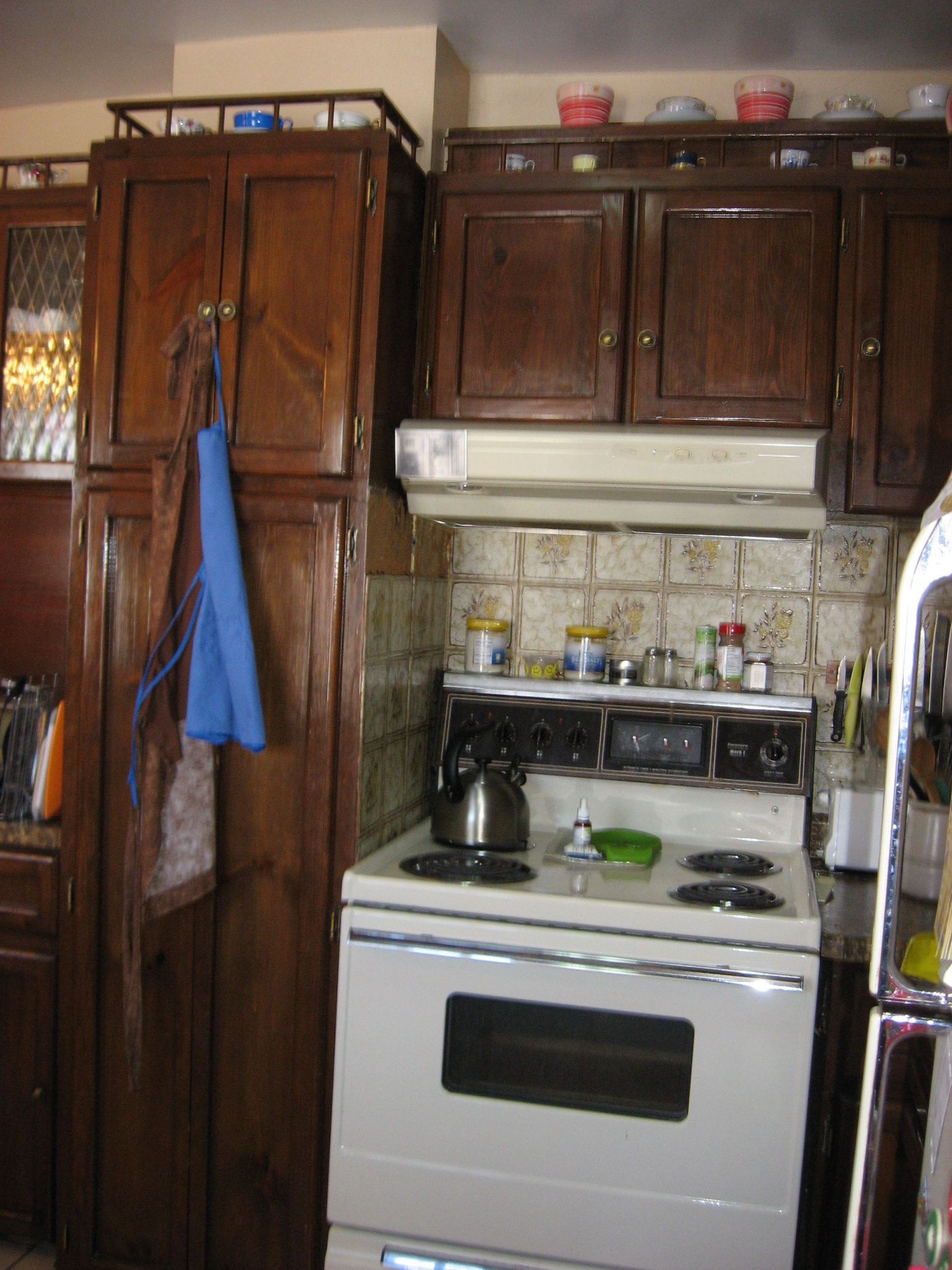 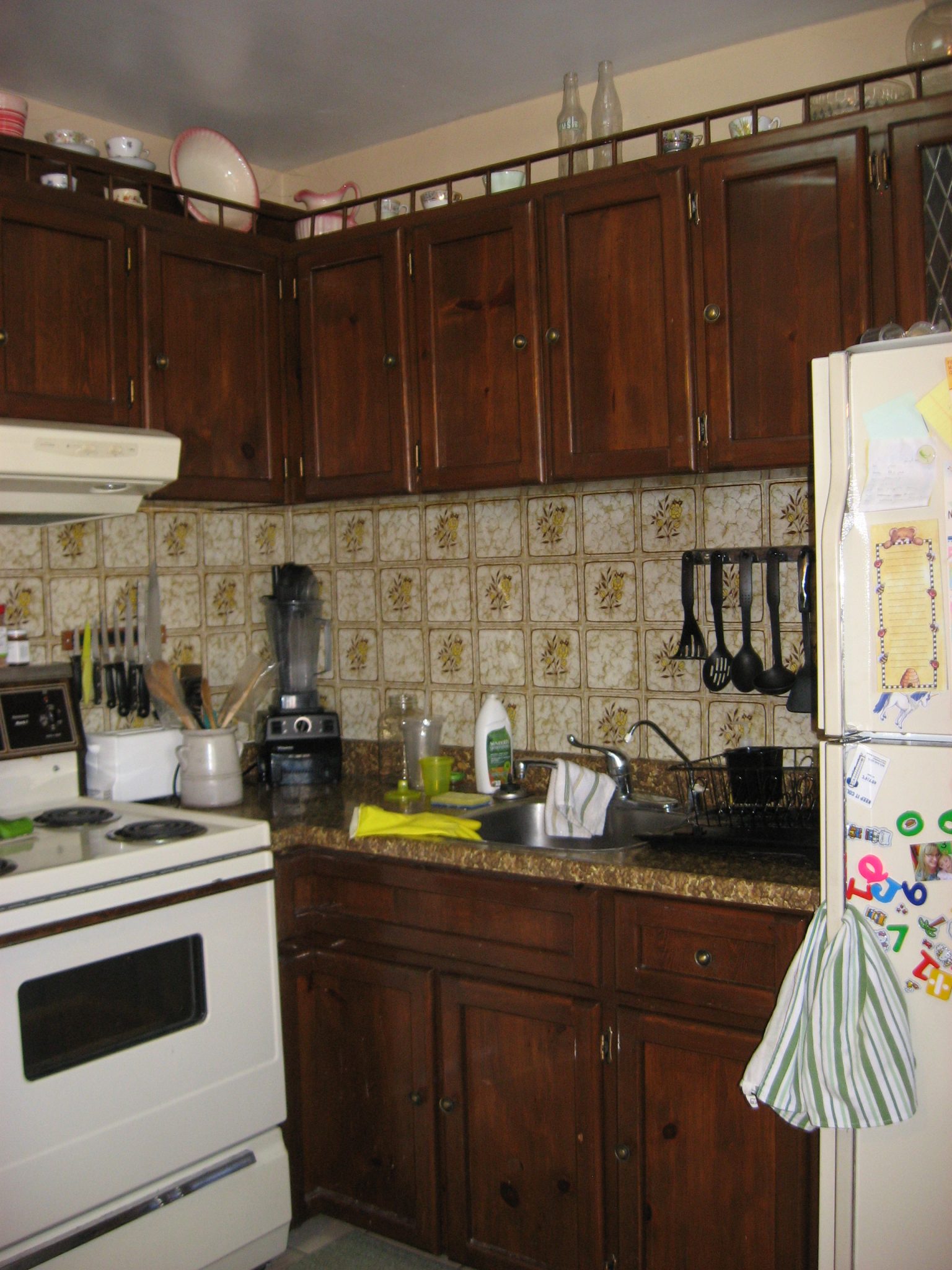 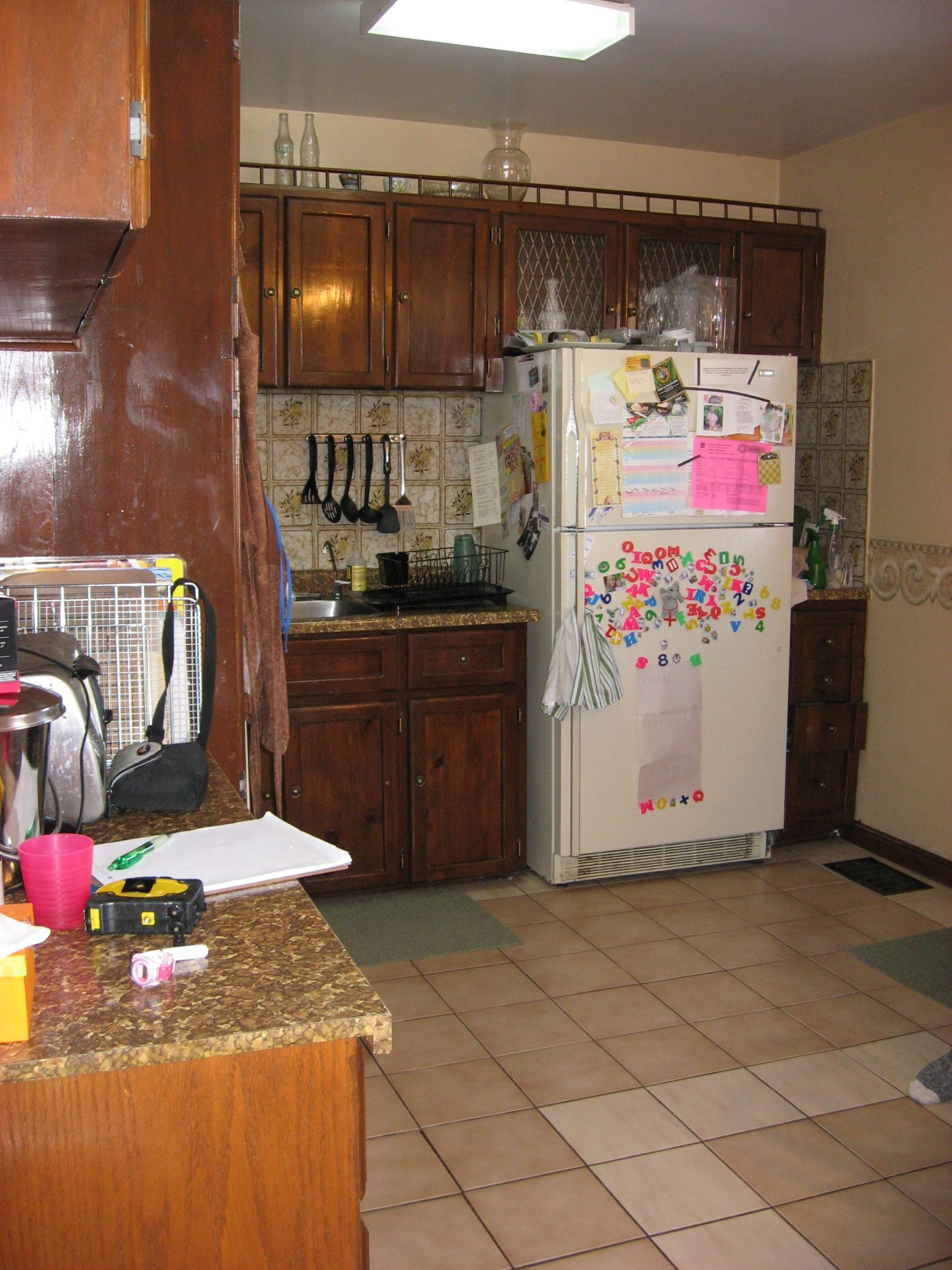 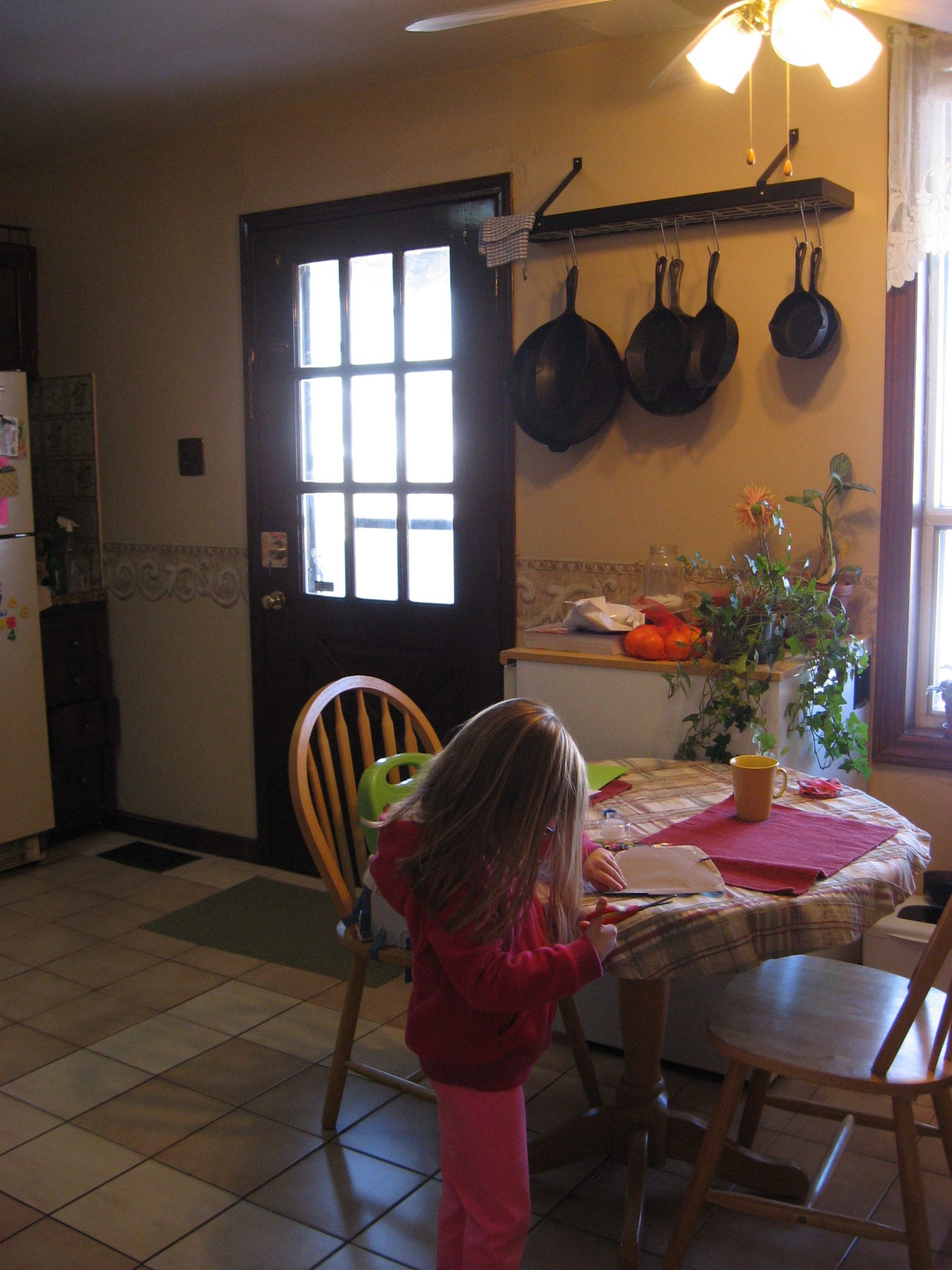 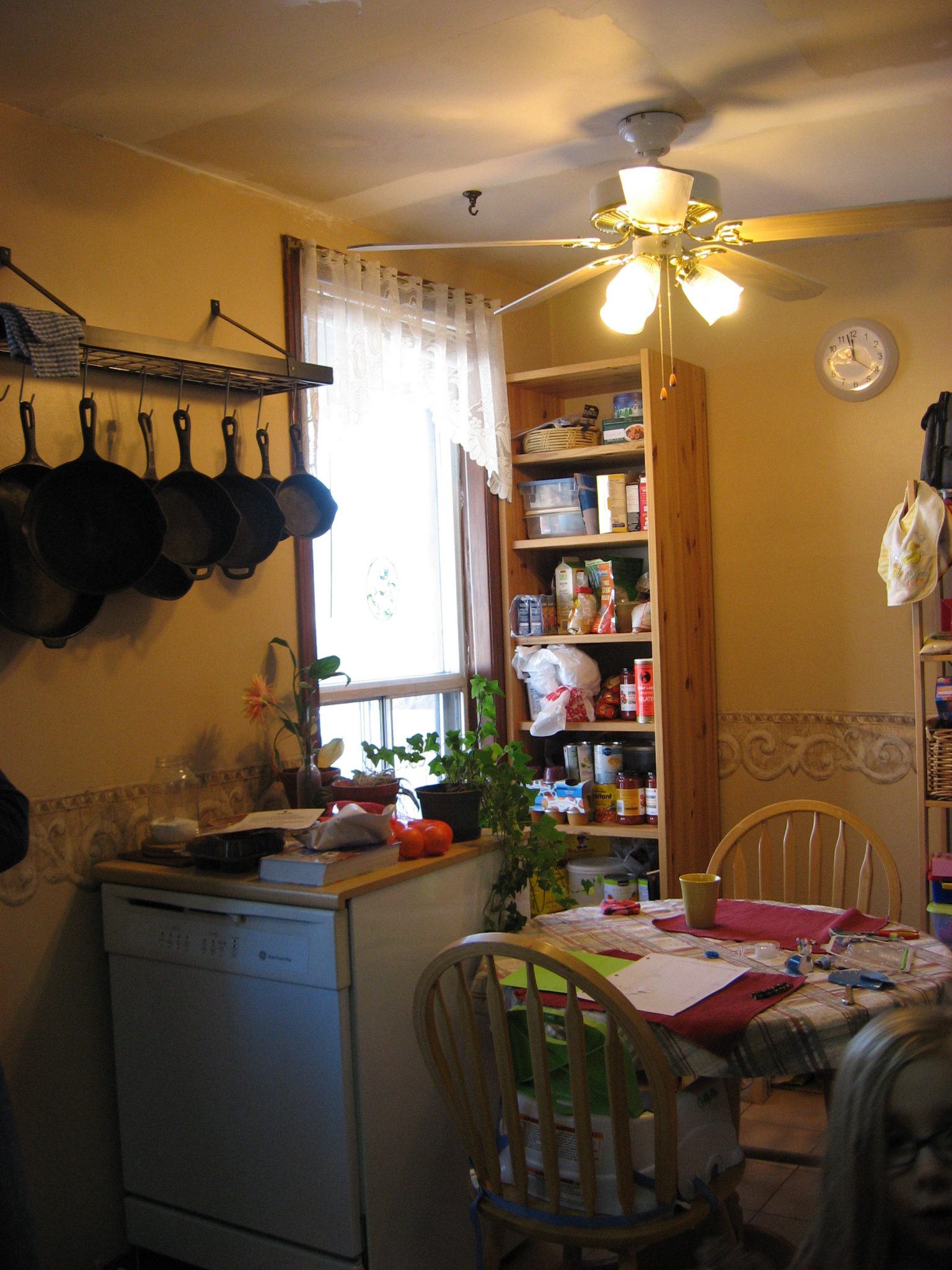 It was dark, there was very little counter space, and honestly, I don’t know how she lived with it for so long!!

The kitchen needed to be brought back to the studs so some much-needed insulation could be installed–the house had none and as she was right by Lake Ontario, the room was freezing in the winter! This gave me a blank canvas to work with; the room was approximately 10’ x13’ so not a huge space, but enough to add in what the client wanted.

Space planning is one of my favorite things to do, so when I can, I try and provide three options for my clients so they can really see the potential of the space. We discussed the possibility of an island, but the room was too narrow to accommodate it. Out of the three designs presented, she chose the plan that gave her the most storage and new sliding glass doors to her backyard (increasing the natural light in the space exponentially). This meant that we needed to turn her original door into a window, and also increase the size of the opening of her window for these new sliding doors…oh… and rebuild her deck to accommodate the new opening. (Remember the Domino effect I mentioned?) There was also a small window we found on the wall with the stove (it had been boarded up); we decided to permanently brick it in as it would not have brought in much light and also would have hindered our preferred layout. We maximized every inch we could to make this space functional and bring in as much storage as possible—even the banquette was outfitted with drawers for craft supplies!

Once the overall layout had been decided, then we moved on to the more specific details. We wanted to work with the character of the older home, but also create an open and bright space. At first we discussed white cabinetry, but after taking a look at what Ikea had to offer, we chose the Bodbyn collection in the soft gray. To keep things from looking too heavy, the upper cabinetry was outfitted with glass doors, no uppers were placed over the stove, and the wall with the window was left bare. The gap that you see (below) by the sink is actually where the dishwasher was to be placed; we had to rework the corner unit in order to fit it in, but thanks to our amazing contractor, it all worked out in the end! 40” upper cabinetry was installed that goes almost up to the ceiling—maximizing the height of the room. We added in a pantry, pull out disposal bins under the sink, and storage drawers to the built in banquette. 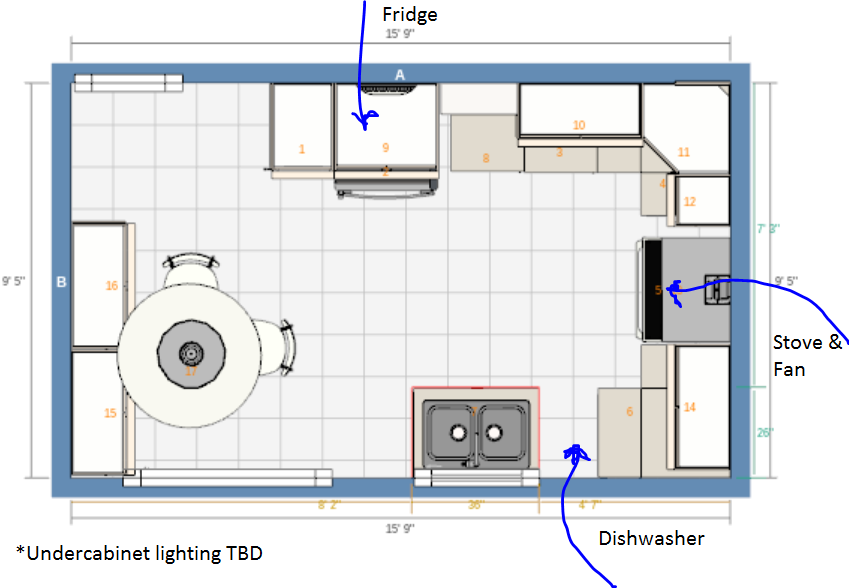 The homeowner had an extensive cast iron pan collection that she uses on a regular basis, so we created a spot that creatively stored these pieces by using Ikea’s Fintorp Rail collection to suspend them vertically. Stainless steel appliances were chosen to blend in with the cabinetry, and the natural stone counters were also a custom Ikea purchase. Subway tile with contrasting grout was a classic choice for the back splash and a luxury vinyl tile covers the floor—a warmer choice than the traditional porcelain tile. Custom drapery panels, roman blind, and a striped cushion for the banquette add softness and pull the whole look together bringing in pops of turquoise, aqua, and green. A soft blue paint was chosen for the walls, a simple chandelier was hung, plus throw cushions from Homesense and a vintage inspired clock from Vintage Charm were added to the eating area to complete the space. 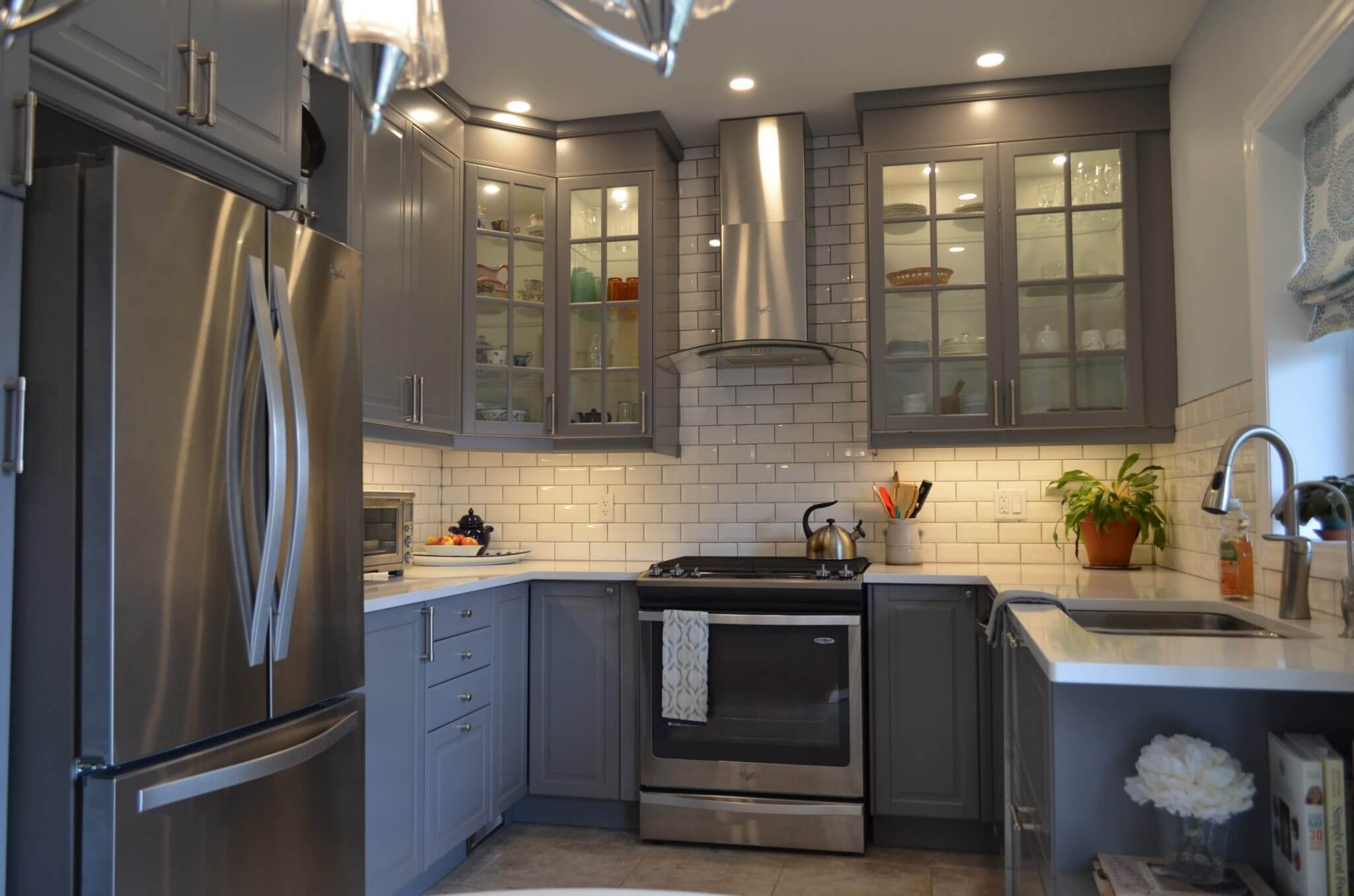 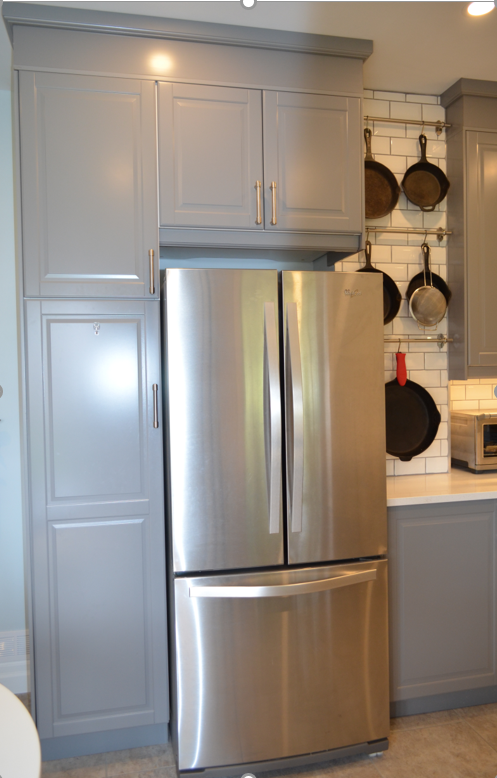 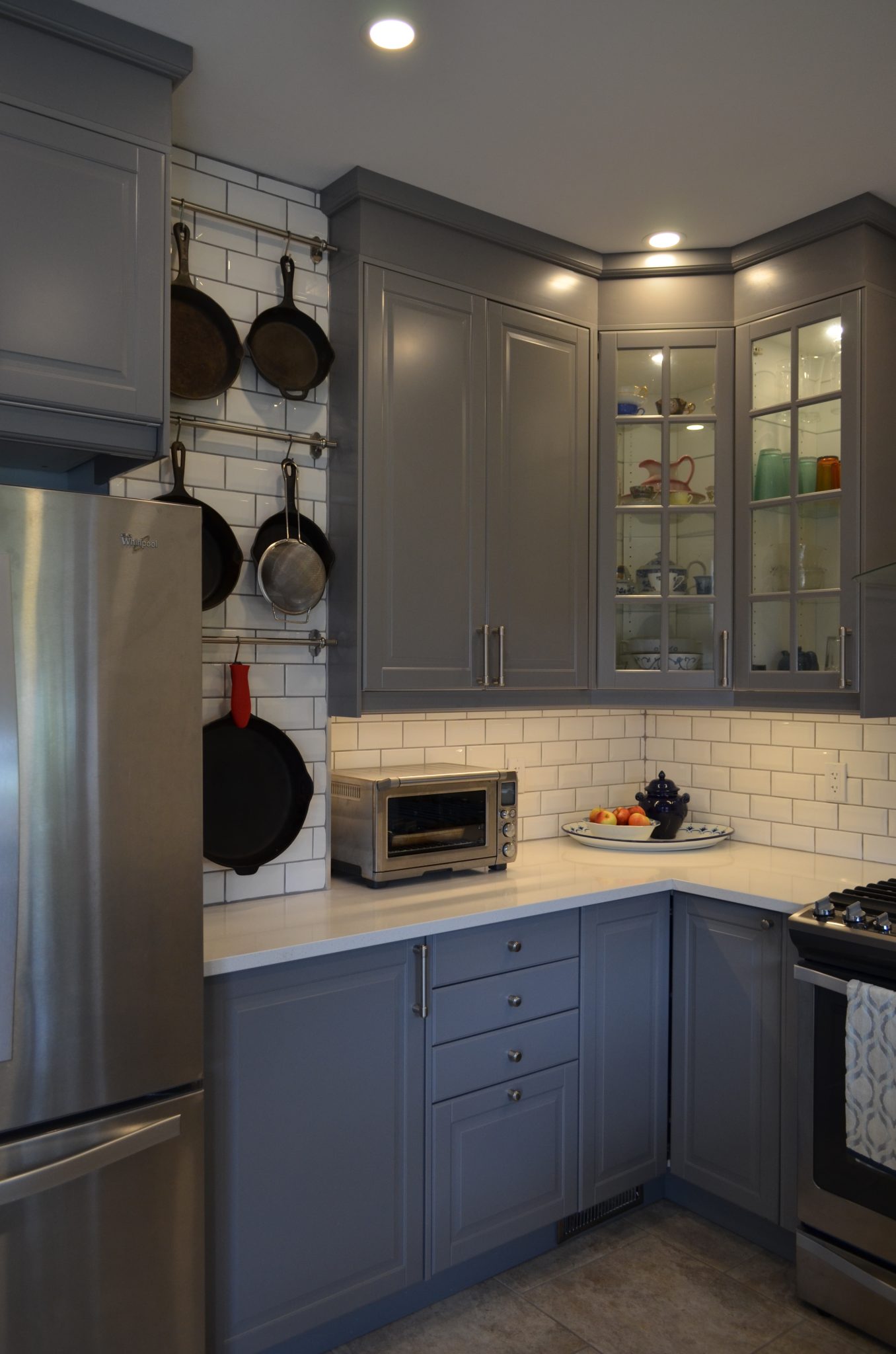 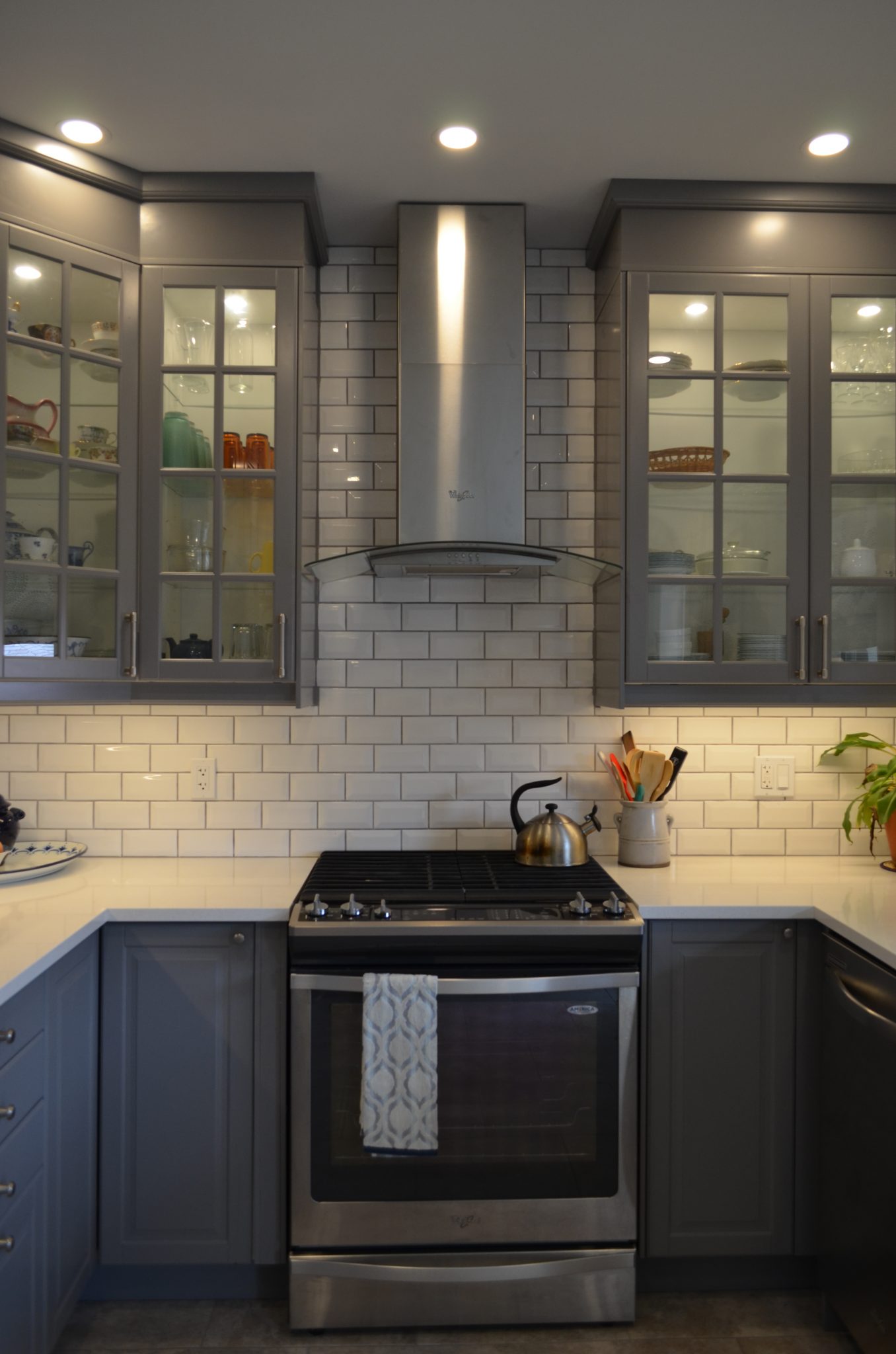 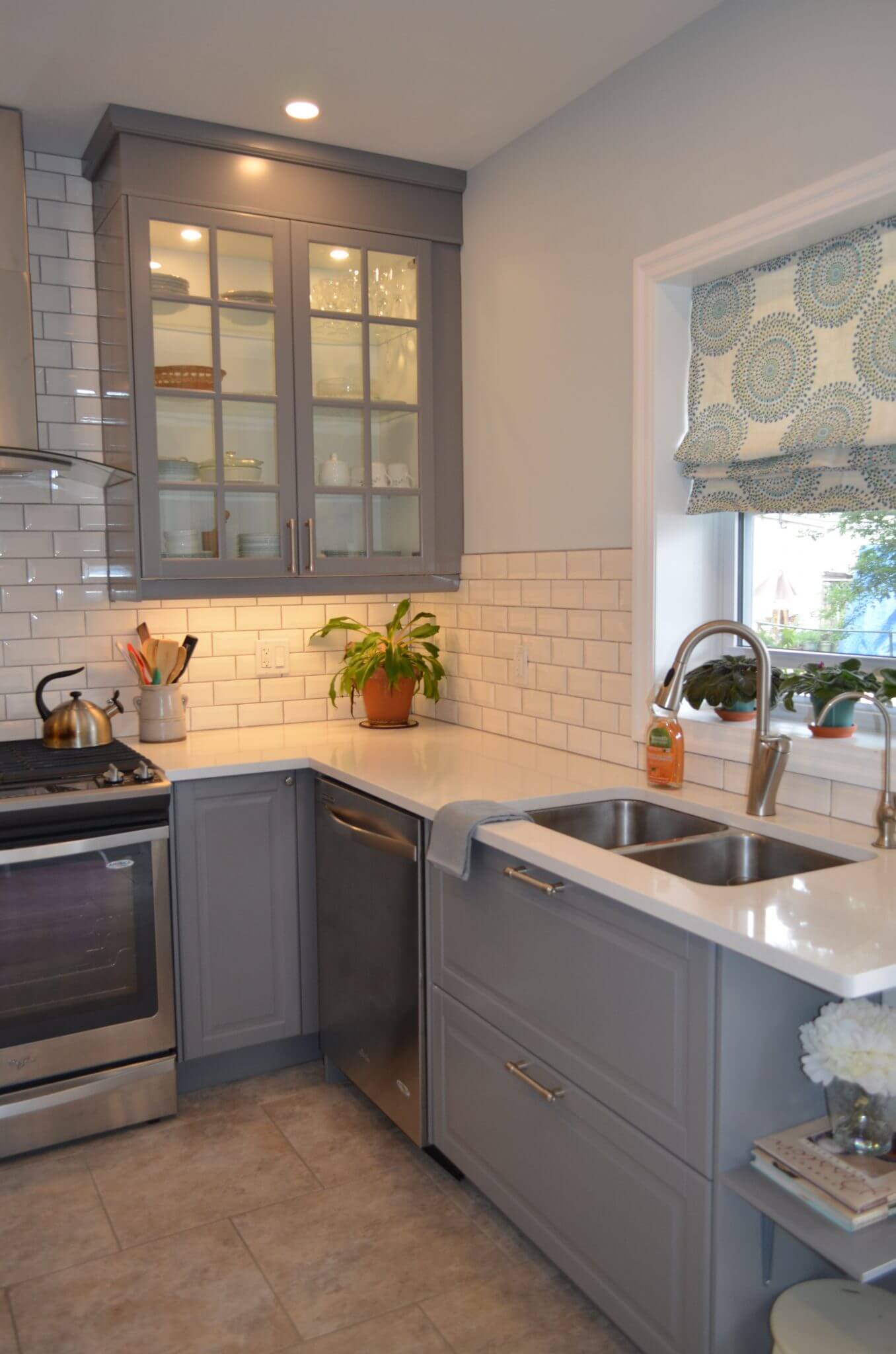 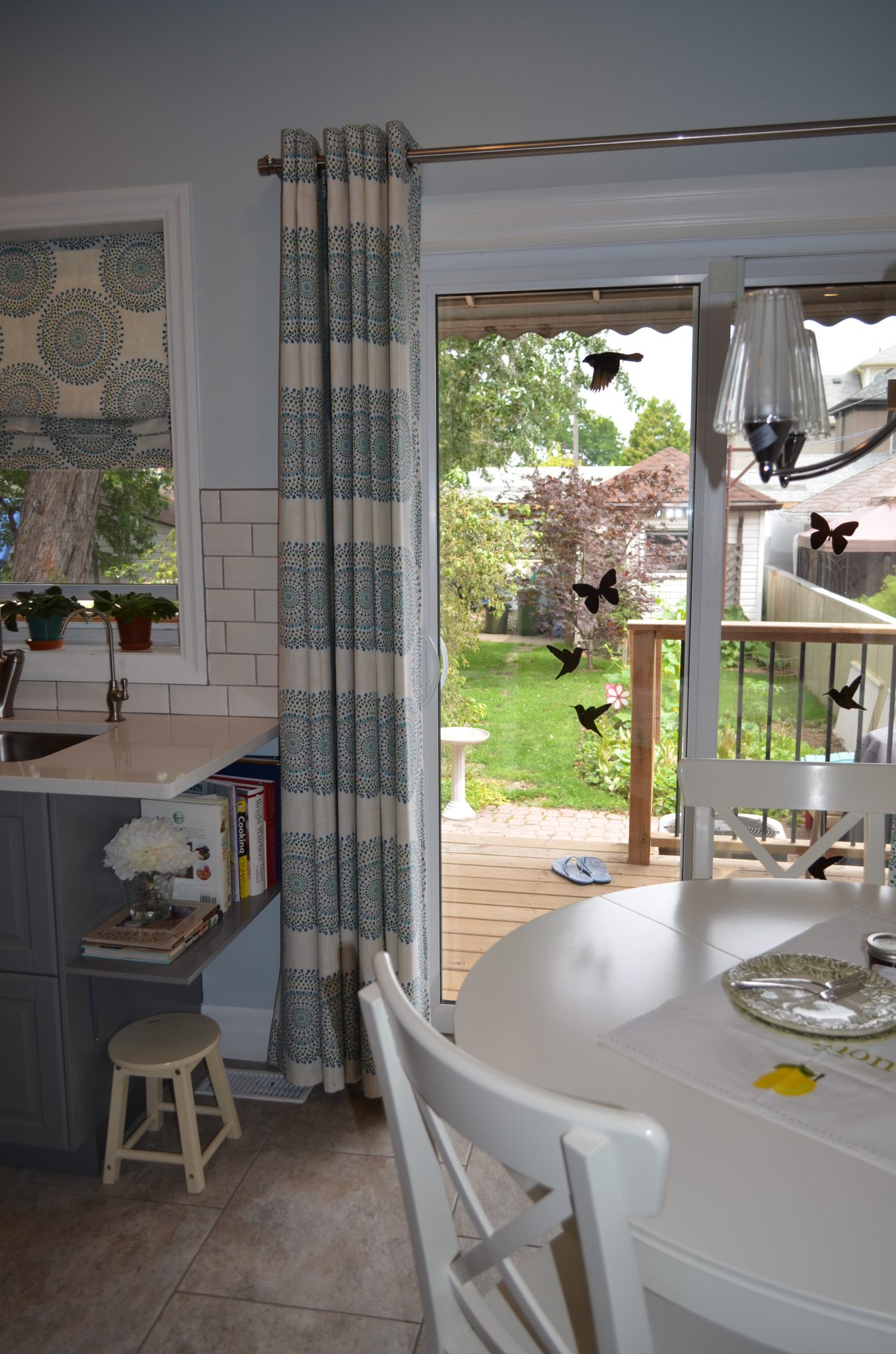 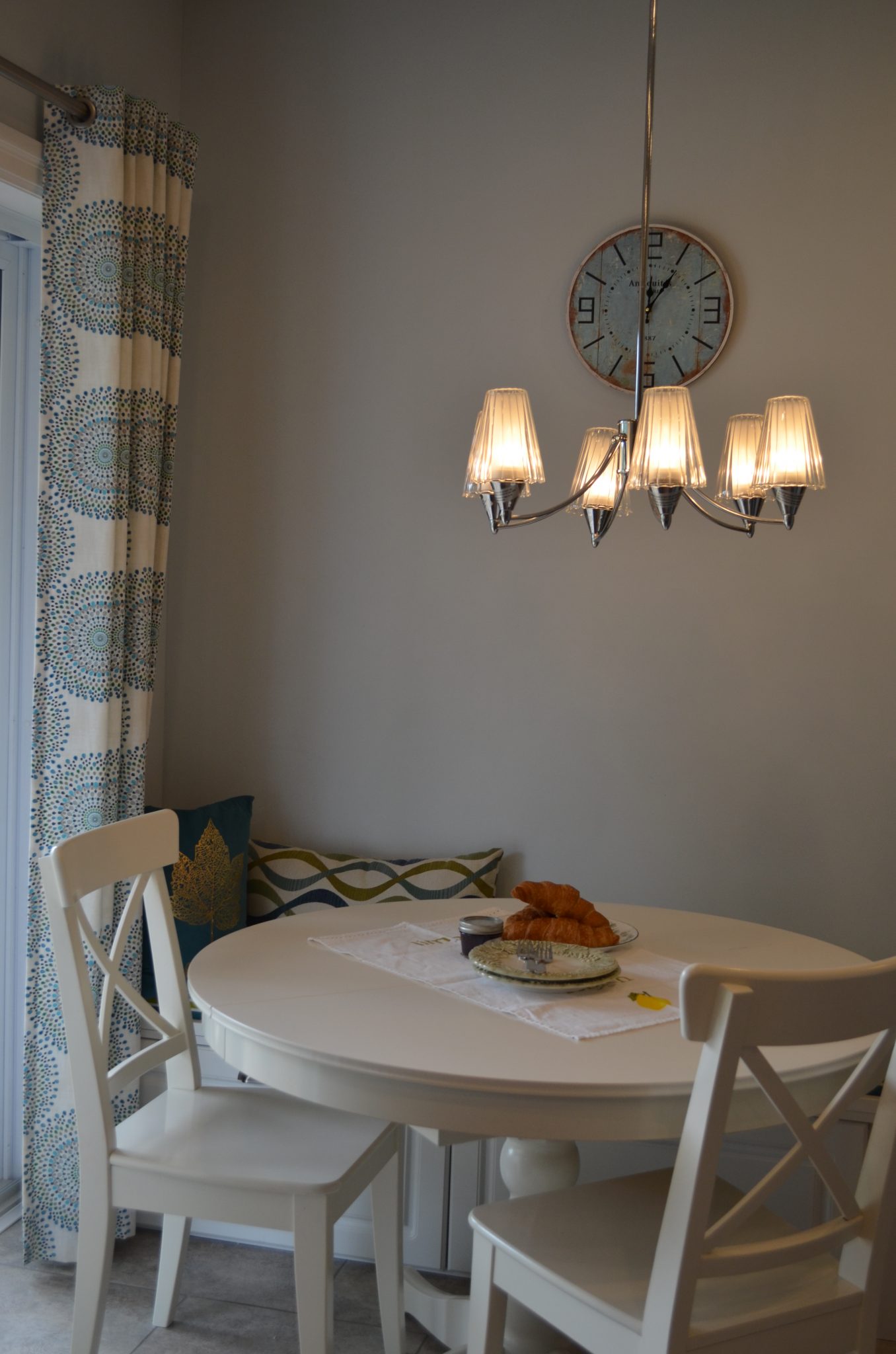 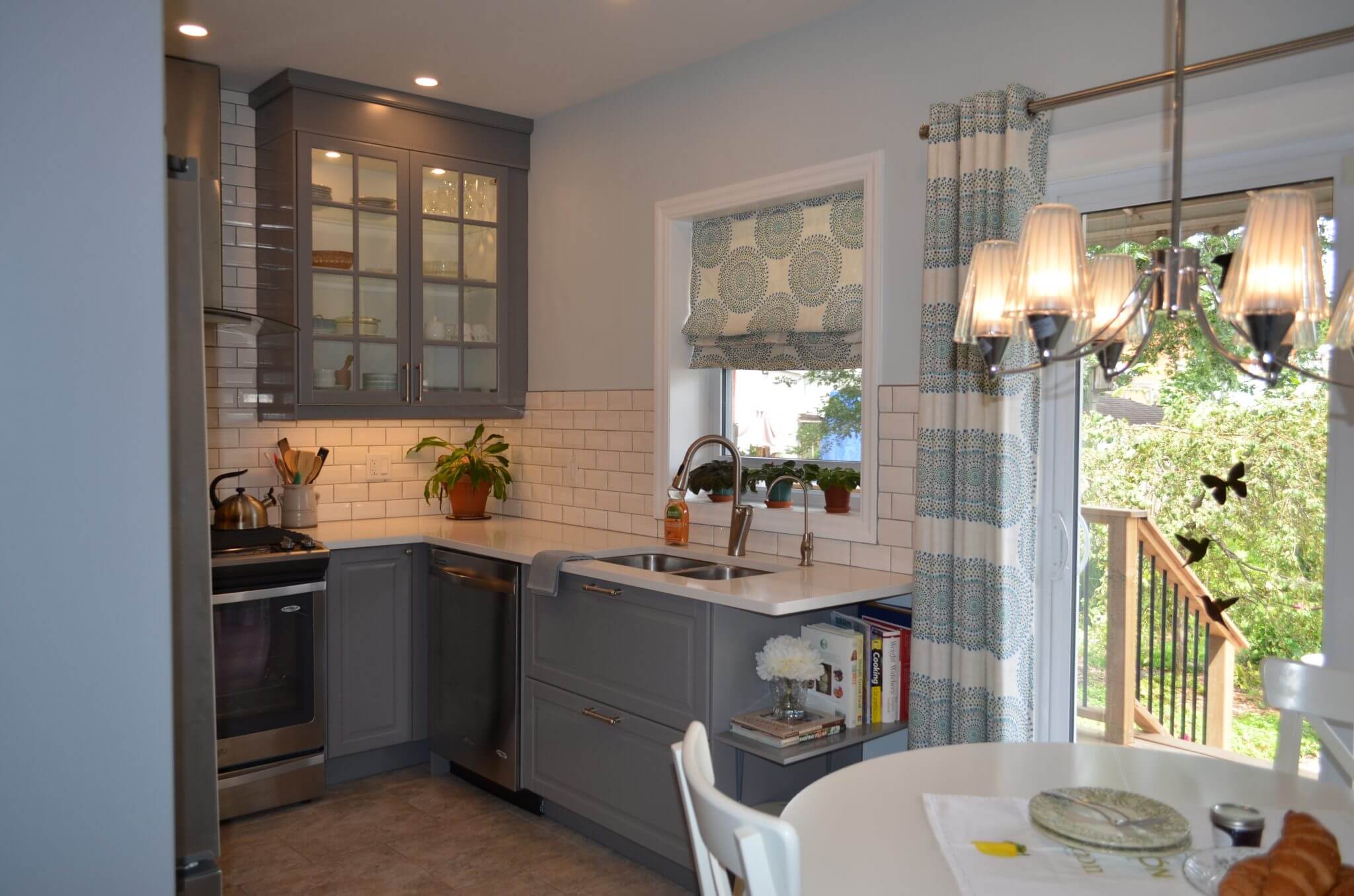 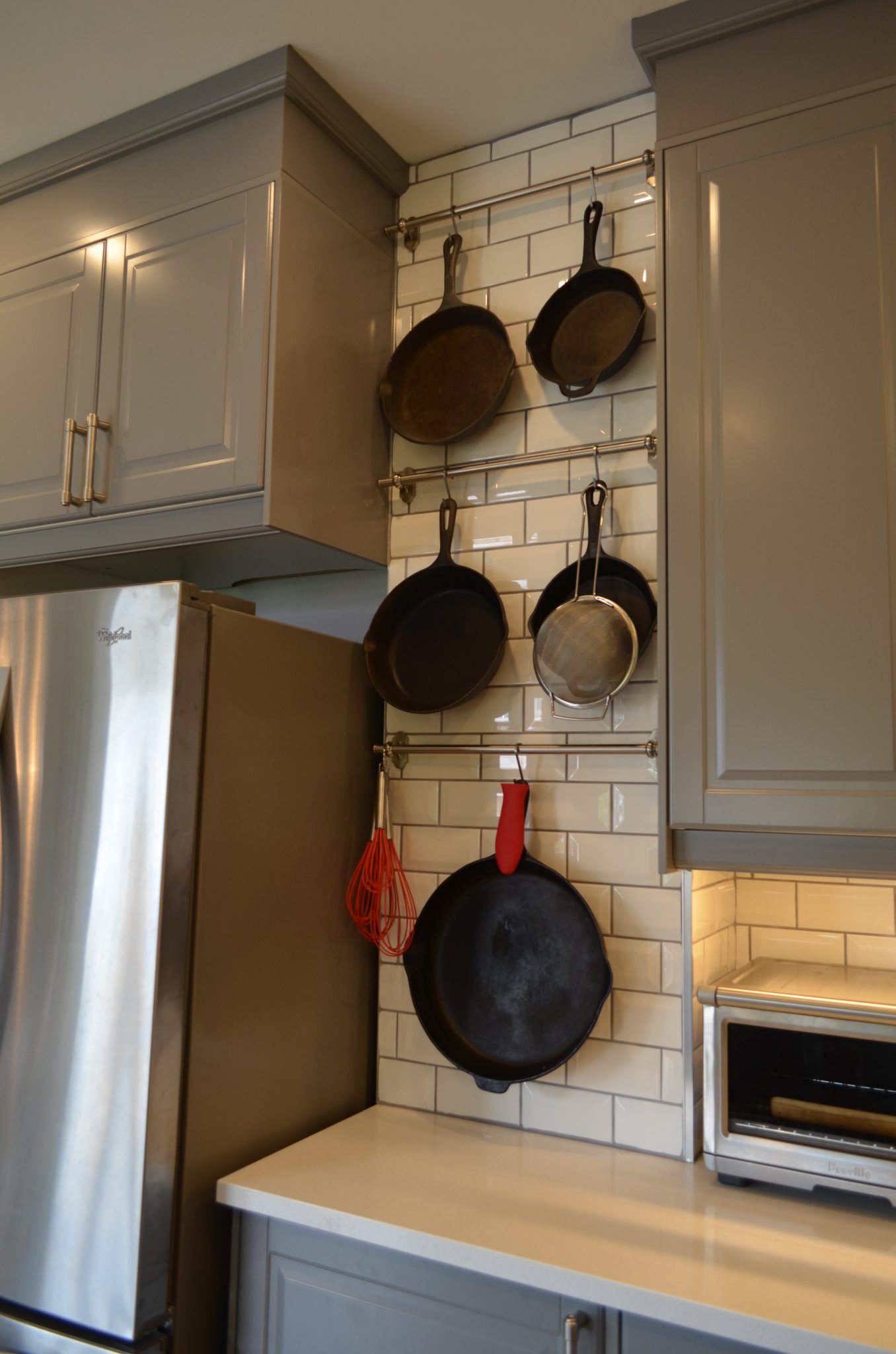 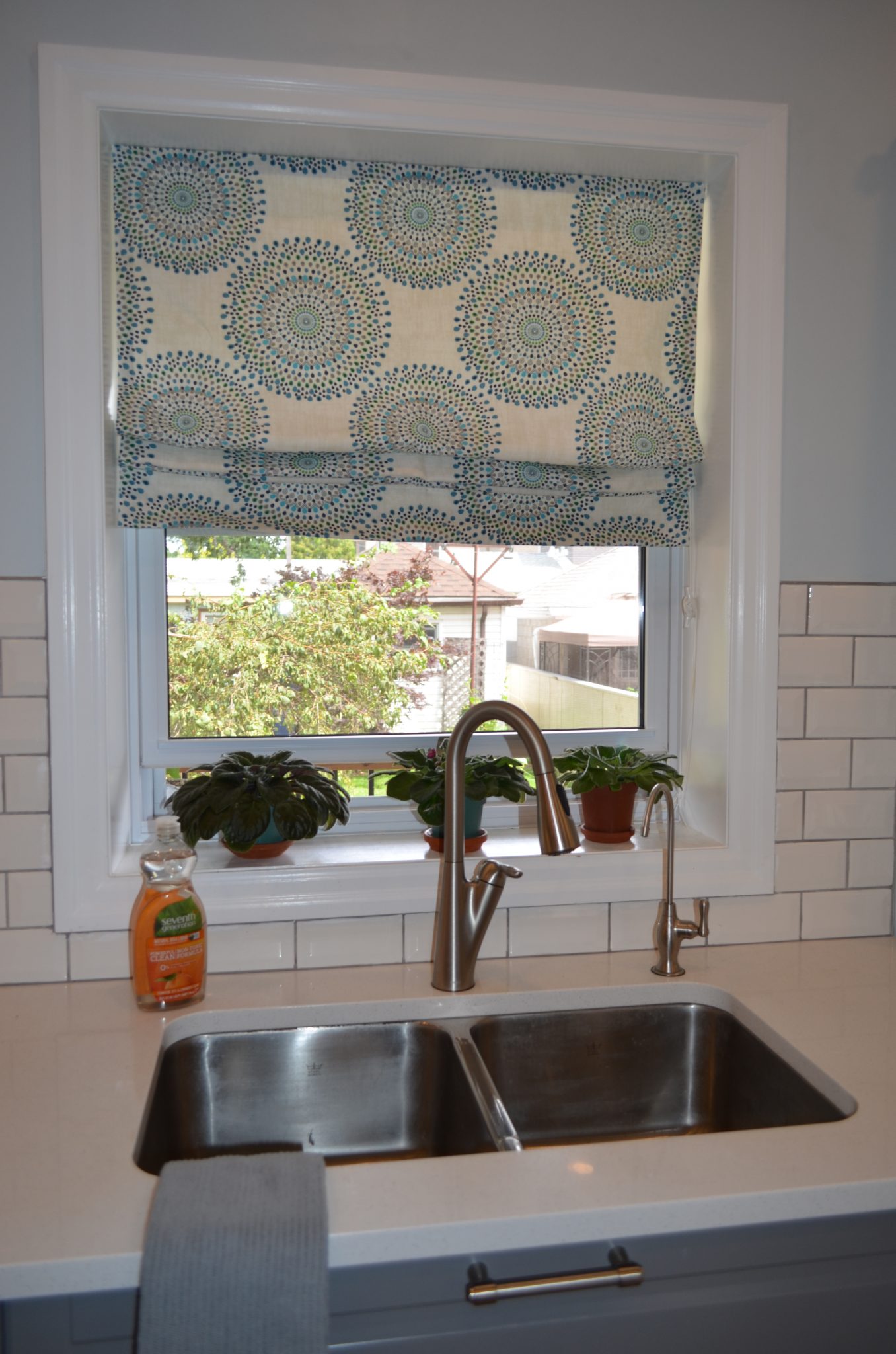 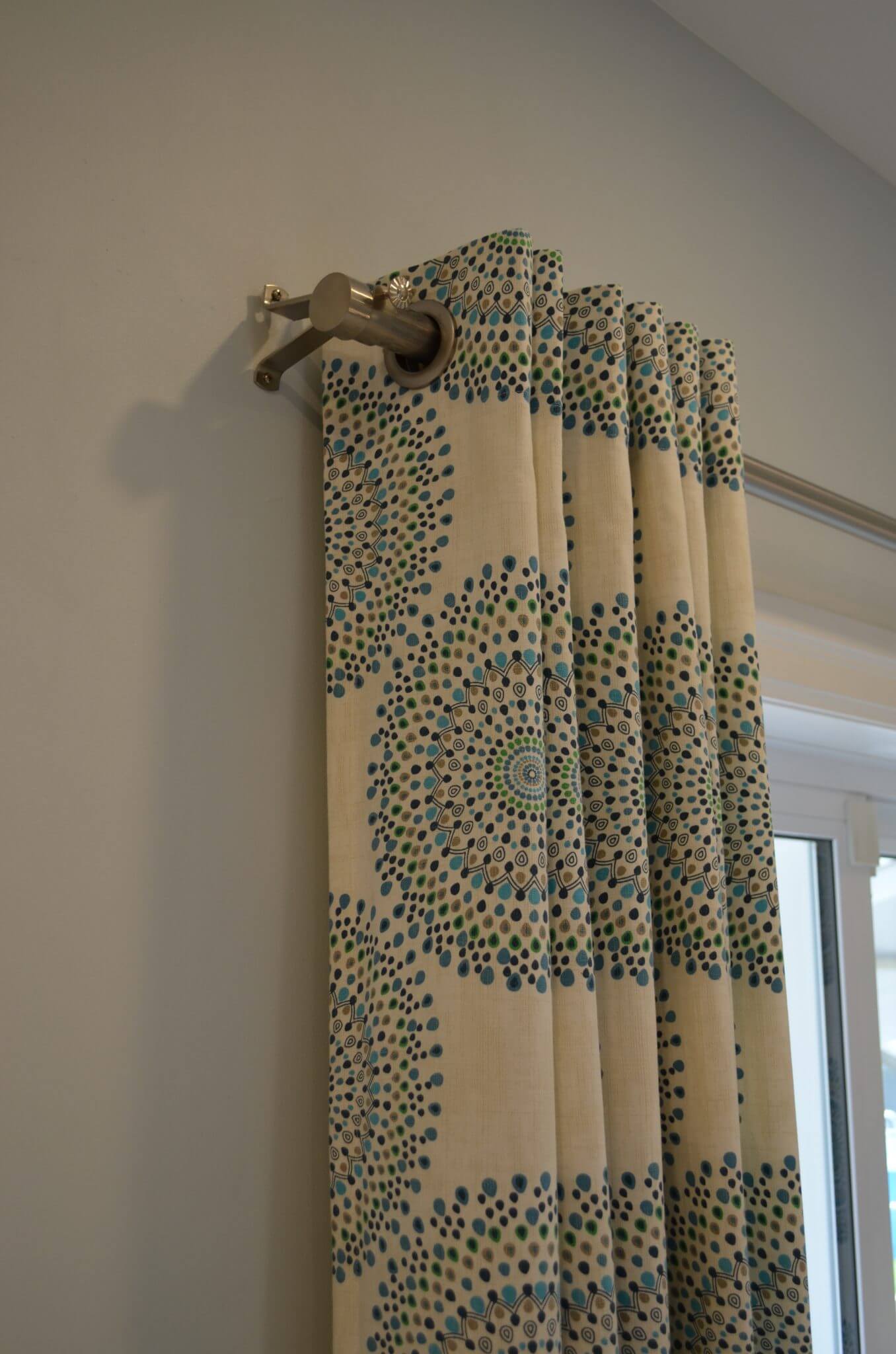 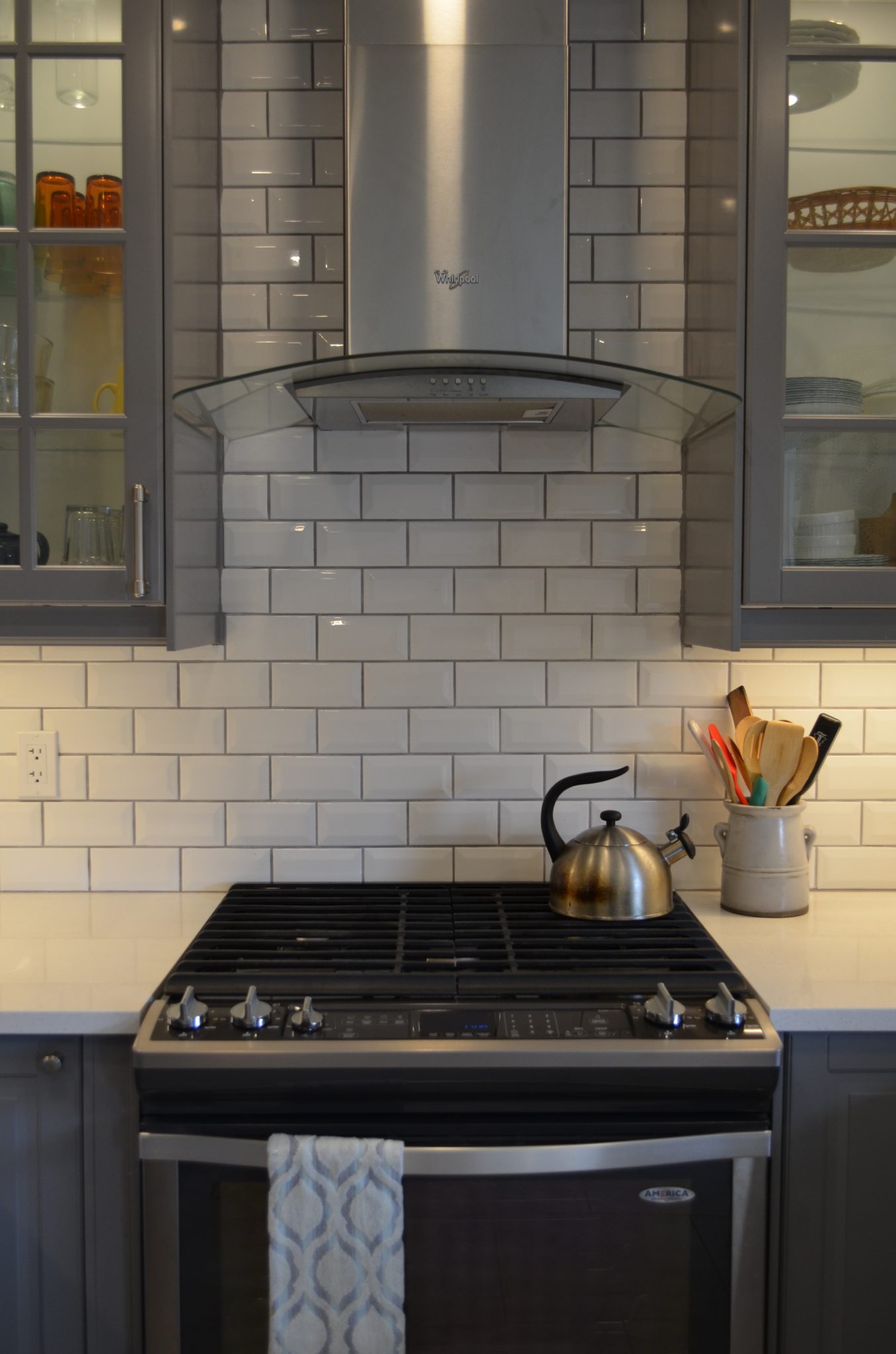 To say the homeowner is thrilled, is a bit of an understatement; it was four + months of reno dust but now she can enjoy this space for years to come! This room went through quite the transformation and we are thrilled that this kitchen is not only beautiful but functional in every way–the mission of every project at Bella Casa Interiors. To see more photos, feel free to check out my website and see more of the detailed images of this space. I’d love to hear your thoughts so feel free to leave a comment; I’d love to hear from you!